Together with UNESCO and RedPop, the Science Communication Centre Rhine-Waal is going to host three workshops across Latin America, in September, which are meant to explore a diversification of what has mainly been seen as comunicación / divulgación / popularización of science. 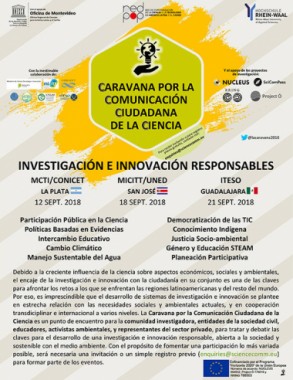 The approach will be to discuss opportunities and risks of a more community-driven form of science communication, which is much less about explaining or even selling science than it is about ways to enable and incentivise forms of research that incorporate or even anticipate societal needs and challenges. They are calling this a “Comunicación Ciudadana de la Ciencia” (kind of ‘Civil Communication of Science’), a series of workshops framed as a “Caravana”: on 12th Sept in La Plata (Argentina), 18th Sept in San José (Costa Rica), and 21st Sept in Guadalajara (México). All events have been set up and are being co-hosted by the national Ministries of Science, and our local research partners / universities.

Representatives of a diverse spectrum of stakeholders of science is going to be present, such as industry and CSOs, governments and parliaments, NGOs and regulatory bodies… We have however kept at least a dozen places free at each event for those who are most interested in contributing to our discussions. There won’t be a fee for participation. Catering is included. We are explicitly inviting practitioners just as much as our academic colleagues! All English presentations and discussions are going to be translated into Spanish; some Spanish ones into English; the rest is going to be in Spanish only. All you’d need to do, is send us a message when and why you would like to join: enquiries@sciencecomm.eu

Interestingly enough, the Persian term “caravana” (Karawan), originally and etymologically, stood for a row of animals, and only later represented the way of life of a nomad tribe. In his book about serendipity, science sociologist Robert K. Merton uses a story about stolen camels and princes, to conceive a journey process as unexpected enough as to generate observations and findings by accident that may contribute to the creation of unforeseen knowledge. THIS is exactly the spirit of our own ‘Caravana’. Our team wishes to know more about Latin American sciencecomm trends, while trying to avoid as many ‘Western’ preconceptions as possible, something the psychologists in methods design call Reactivity.

The goal is to engage in a ‘pluricentric’ dialogue with a diverse array of representatives from Latin America and the Caribbean. Indeed, it is no coincidence that we focus on that part of the globe. There are patterns in the communication of science that even though they are present around the world, they seem to be especially intense in these regions. For example: the increasing pressure over natural resources and the consequent need for more diverse participation in environmental decision-making to create shared values and futures; social movements that propose alternatives to the narrow use of innovation as a mere economically-driven process; and grassroots organisations that challenge particular descriptions and prescriptions about the natural environment.

With the feedback from these meetings, we expect not only a better understanding about the current changing forms in which the intersections of science, civil society, innovators and environmental groups are manifested, but also a reflective reasoning framework, from which we can come back home to Cleves, to initiate new projects that are not the simply the product of our own plans and purposes, but also of the unexpected observations that we expect to emerge from these kinds of encounters. It would be great to have YOU with us!

You can find out more about the projects leading to this workshop series, especially SciComPass, RRING, NUCLEUS, and Ô, under sciencecomm.eu