UVIECON 2015 discussed on global universities and their regional impact

On March 13 the 650th University of Viena International Anniversary Conference gathered higher education experts from around the world to discuss ways for being a global university and to secure positive impact to society. 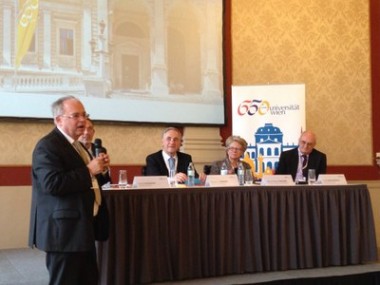 Humans living in the last third of 20th century and the beginning of the 21st are enjoying the privilege of experiencing the definitive globalization of the planet. The university is one of the first global institutions, if not the first, ever since its inception in Asia in the 7th century, the Al Karaouine University in Fez, in AD 859, or Bologna University in AD 1088.

In addition, as was stressed at the EUA Conference in Brno nearly 10 years ago, globalization emphasizes localization, the importance of place, the emergence of regions as platforms for global competition. With a great deal that can be said about it, for which there is no space here, this is also the spirit that inspires the European policy “Research and Innovation, Smart Specialization Strategy” (RIS3).

So, globalization, localization and universities unavoidably had to get together. And this getting together has been the subject of UVIECON 2015 Global Universities & their Regional Impact. Here, though, the word “Global” has been used in a rather particular sense: as an adjective of university; very differently from what we are used to and what we meant in the article “The glocal university”, included in our previous newsletter. There, the global component refers to the responsibilities and expected impact of universities in the global issues and challenges of humanity.