What impact has the COVID-19 pandemic had on higher education? How to guarantee an inclusive higher education with relevant and quality programs? How can academic mobility be promoted globally? How can higher education institutions contribute to the achievement of the 2030 Agenda and the Sustainable Development Goals?

These and other topics will focus the work of the 3rd World Higher Education Conference (WHEC2022) to be held in Barcelona (Spain), from May 18 to 20, 2022, under the title "Reinventing Higher Education for a Sustainable Future". 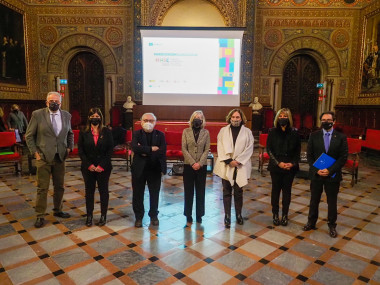 Presented on November 29th at the Paranymph of the Historical Building of the University ofBarcelona (UB) in an event organized by UNESCO, the Spanish government, the Government of Catalonia, the Barcelona Provincial Council, the Barcelona City Council and the Catalan Association of Public Universities (ACUP), since it holds the presidency and technical secretariat of the Global University Network for innovation (GUNi), the event seeks to contribute to the improvement of organizations and higher education systems under the approach of Human Rights and the 2030 Agenda for development sustainable and its promise to leave no one behind.

The Rector of the University of Barcelona (UB), Joan Guàrdia, has welcomed the attendees to the event, declaring that "initiatives like this are fundamental for the future of the planet, which will be built from global cities like Barcelona. Not in vain, dedicate space and talent to discuss how to improve Higher Education is an optimal investment for the future where universities are and will be a meeting place for all aspects of knowledge. A diverse world implies a tolerant and inclusive world, and this implies a simple word: Education."

"It is an honour for Spain to host this Conference at this crucial moment to promote global dialogue on higher education, a dialogue to which all voices are invited and from which ideas and commitments will emerge that will mark the university life of the next generations of students.”, declared the Minister of Universities of the Government of Spain, Manuel Castells.

"What it is about is to redesign the higher education agenda for the next ten years, writing a new roadmap that makes it an inclusive and diverse place that better responds to the needs of development and the current labour market" stated Stefania Giannini, UNESCO Assistant Director General for Education.

Gemma Geis, Minister for Research and Universities of the Government of Catalonia, declared that "universities must contribute to improving local competitiveness and making a fairer society possible. Interaction between cities, universities and companies is essential". Núria Marín, president of the Barcelona Provincial Council, added that “as a representative of the 311 municipalities served by the Barcelona Provincial Council, I value the organization of the third UNESCO World Conference on Higher Education as an important recognition in our territory. A recognition of the long and pioneering pedagogical tradition that characterizes us”. “Barcelona is a city of education and knowledge, where universities represent a central element of social, cultural and economic progress. That is why we are proud to host the third World Conference on Higher Education and to be able to contribute to the promotion of the debate on the future of the university at a global level”, declared Ada Colau, Mayor de Barcelona.

The WHEC2022 Conference aims to break with the traditional models of higher education and open the doors to new innovative, creative, and visionary conceptions that not only serve current sustainable development agendas, but also pave the way for future learning communities that exceed the barriers, speak to everyone and be inclusive with all learners throughout life.

The main themes of the conference are (1) the impact of COVID-19 on higher education; (2) Higher Education and the Sustainable Development Goals, (3) inclusion, (4) the quality and relevance of the programs; (5) academic mobility, (6) governance, (7) funding, (8) data and knowledge production, (9) international cooperation, and (10) the futures of higher education.

The event will give voice to all actors in academic life, including professors, researchers, administrators, entrepreneurs, young people, political leaders, and social leaders. The conference will also include a variety of side events, informal meetings, and exhibitions (technology, innovation, good practices, art, science, culture) to expand learning and exchange opportunities for all participants.

The International Science Council (ISC), the International Association of Universities (IAU) are among the partners of the Conference, as well as the Organization for Economic Cooperation and Development (OECD) or the UNITWIN Program and UNESCO Chairs.