The TeRRIFICA Consortium meets in Barcelona: moving towards innovative climate action through co-creation

The 3rd TeRRIFICA Consortium meeting was held in Barcelona on December 3rd-4th 2019. The event was hosted at La Fàbrica del Sol, a municipal facility for environmental education that integrates a number of services for citizens in renewable energy, urban environment and sustainability.​

ACUP / GUNi organized the meeting within the framework of the H2020 TeRRIFICA project, whereby eight European institutions work together to foster competence for climate change adaptation and mitigation in different European regions with a specific focus on Responsible Research and Innovation. 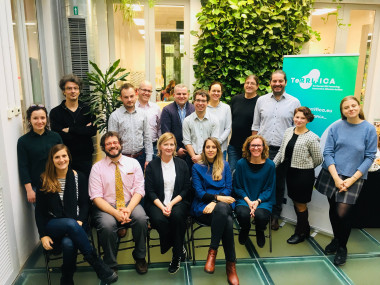 On December 3rd and 4th 2019, the TeRRIFICA Consortium gathered in Barcelona to celebrate the third Consortium meeting of the project. The team used this opportunity to share the first results of the several tasks of the project, but it was most of all a time for discussion and reflection about what the group has achieved during the first year of work.

The meeting took place in La Fàbrica del Sol of Barcelona, a municipal facility for environmental education that integrates a number of services for citizens in renewable energy, urban environment and sustainability; and was hosted by ACUP/GUNi, partner of the project. During the meeting, the TeRRIFICA members closed up different project tasks and together wondered about the future months.

This 2-day meeting was a key moment to discuss important issues for the project, such as the coming launch of the TeRRIFICA Crowdmapping tool, through which the citizens, by pooling their efforts, can help build a map that highlights the region's main climate threats: air temperature, water, wind circulation and air and soil quality; and the evaluation and monitoring of TeRRIFICA.

The meeting also focused on the current co-creation and stakeholder involvement activities of the TeRRIFICA pilot regions, which are being carried out by the institutions from the TeRRIFICA Consortium. They can be consulted here: www.terrifica.eu/pilot-region. Starting from 2020, eight summer schools will be held within the framework of the TeRRIFICA project, one by each partner.

Other issues that were discussed are the dissemination actions of TeRRIFICA, which has been presented in a total of 30 conferences, seminars and workshops in 2019 throughout Europe and beyond. The increasing engagement in Social Media and in the TeRRIFICA main communication channels was celebrated as well. This participation involves more than 600 followers on Twitter, a substantial increase of subscribers to the TeRRIFICA newsletter and 75 communication impacts on media (newspapers, blogs, websites…) during the first year of the project.

On December 5th 2019, the TeRRIFICA Consortium gathered at Institute of Environmental Science and Technology (ICTA-UAB) for the participative session “Citizen Science Experiences from academia”, in which researchers of ICTA and CREAF presented the following projects:

If you want to stay informed about the developments of TeRRIFICA, please visit www.terrifica.eu, subscribe to the project's newsletter and follow our Social Media channels: