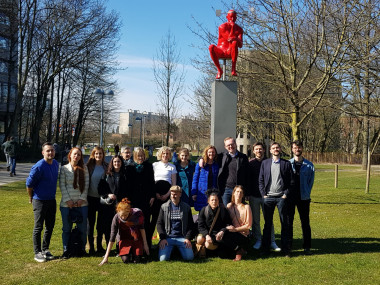 The SHEFCE project planned a series of three peer-learning visits to be held at the action-planning universities in Girona (UDG), Krems (DUK) and Brussels (VUB). The third visit was held at the Vrije Universiteit Brussels (VUB) on 9-11th March 2022, involving around 20 participants coming from the different SHEFCE partners institutions from Ireland, Croatia, Spain, Belgium  and Austria: Universitat de Girona, University in Rijeka, Institute for the Development of Education, Technological University Dublin, Donau University Krems, Ghent University and ACUP-GUNi.

The aim of the visit, hosted by the VUB Science and Outreach Office and framed as a training activity, was for participants to learn about community engagement in higher education in specific contexts (and its assessment). Visiting participants attended the visit as 'critical friends' to ask further questions about university's community engagement, the TEFCE report and the SLIPDOT findings. This SHEFCE peer-learning visit included discussions in parallel thematic focus groups about community engagement in practice and an introduction to the vision and mission of OpenLab, which is a VUB/ULB initiative that creates an in-between, transformative open space for university and societal actors to meet and experiment. The visit also included an introduction to La Serre, a community project based on an hybrid space with a large shared workshop for artists and a hangar that hosts unsold food processing activities, repair workshops and socio-cultural events.

It was a truly inspiring experience, full of learnings for community engagement activities that will be key for a fruitful development of the project.

You will find more information about the SHEFCE project on the website shefce.eu

An international project has been launched to support community engagement of European universities, understood as university partnerships with external stakeholders to address societal challenges. The project (entitled ‘SHEFCE – Steering Higher Education for Community Engagement’), which is funded through the European Union’s Erasmus+ programme, aims to build the capacities of universities, policymakers and stakeholders in Europe for mainstreaming community engagement in higher education. The SHEFCE project is led by the Institute for the Development of Education (Croatia) and gathers 22 partners/associate partners from six EU Member States. The associate partners include the European University Association, the European Association of Institutions in Higher Education, the European Students’ Union, the Organisation for Economic Cooperation and Development and the Council of Europe.

Community engagement is an integral part of universities’ ‘third mission’ activities. However, community engagement has so far been largely marginalised in higher education policy, with priority given to the the economic significance and impact of universities. The broader societal role of universities has begun re-emerging in policy initiatives, as reflected in the EU’s Renewed Agenda for Higher Education and the Horizon 2020 ‘Science with and for Society’ programme, as well as in the recent European Universities Initiative.

The SHEFCE project is a follow-up to the project TEFCE – Towards a European Framework for Community Engagement in Higher Education that has developed a toolbox to support universities and policymakers in supporting community engagement. The SHEFCE project will have four main outputs:

The SHEFCE project is co-funded by the European Commission’s Erasmus+ programme Strategic Partnerships in Higher Education and will last until August 2023.