Since 1999, Tilbury has been involved with GUNi in the field of higher education innovation and sustainability. We would like to thank and congratulate Prof. Tilbury for her commitment, inspiration and involvement with our common work. 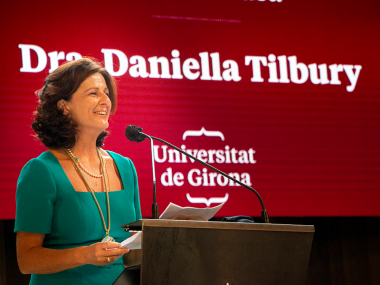 Daniella Tilbury received the title of honorary doctor from the University of Girona on September 16th, 2021. Her work has contributed significantly to the progression of sustainability as a key agenda for the future of higher education, not least of all through her research and policy work in the field of Education for Sustainable Development, where she is one of the world’s lead experts.

Daniella Tilbury is an educator and sustainable development leader; she was the first woman in Gibraltar to hold the title of university professor. She was also awarded the position of inaugural Vice-Chancellor and CEO of the University of Gibraltar and became Gibraltar’s first Commissioner for Sustainable Development in May 2018. She was recognized as an honorary don of St Catharine’s College, Cambridge, in July 2018 because of her widely acknowledged scientific and social contributions. Daniella Tilbury's international and policy work has contributed significantly to the progress of sustainability as a key agenda for the future of higher education. She has been a particularly effective contributor to the global development of Education for Sustainable Development. With its award, the University of Girona recognizes the exceptional value of her work in the field of sustainable development and acknowledges her support of and close collaboration with staff from the University.

Video of the event and investiture speech: