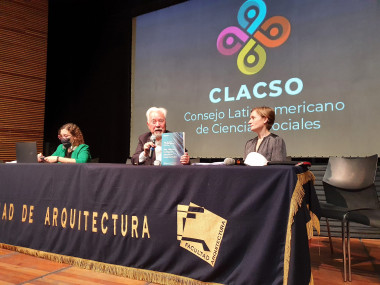 On the 10th of June we had the opportunity to present the 8th GUNi World Report within the framework of the 9th Latin American and Caribbean Conference on Social Sciences, which was held at the National Autonomous University of Mexico (UNAM) from the 7th to the 10th of June. The president of the GUNi delegation of Latin America and the Caribbean, Axel Didriksson, was invited to speak about the recently published document during the workshop on "Good practices to reduce inequities in education and link universities with society: Contributions of Universities in Latin America and the Caribbean and Europe to the fulfillment of the SDGs". The GUNi World Report is available in print-version and online: https://www.guni-call4action.org/report-2022

The Latin American and Caribbean Conference on Sciences revolved around inequalities as the main articulating axis and had open and special panels with international guests and keynote dialogues with leading figures from the political, academic, and social fields, as well as training workshops, panels, and thematic tables. The main organizers of the event were the Latin American Council of Social Sciences (CLACSO) and the EU-LAC Foundation.

The Latin American Council of Social Sciences (CLACSO) is an international non-governmental institution with associative status in UNESCO, created in 1967. Currently, it brings together 836 research and postgraduate centers in the field of social sciences and humanities in 55 countries in Latin America and other continents.

The EU-LAC Foundation was created by the Heads of State and Government of the European Union (EU) and the Community of Latin American and Caribbean States (CELAC) in 2010. Its members are the EU and CELAC countries and the EU itself. The Foundation is a tool of the EU-CELAC partnership, and its activities nurture intergovernmental dialogue, in line with the bi-regional Action Plan.