New report: The Role of Universities in the Economic Competitiveness of California

The report was commissioned by the Catalan Association of Public Universities (ACUP) to help inform and guide policymaking in Catalonia. 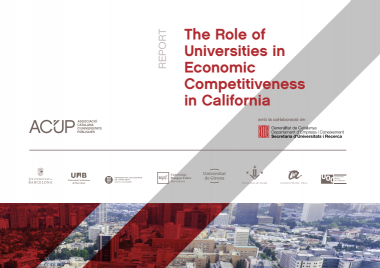 The new report commissioned by the Catalan Association of Public Universities to the researchers at the University of Berkeley, John Aubrey Douglass and C. Judson King, provides a case study of the contribution of the University of California (UC) to the attainment of a competitive economy in this American territory in a manner that may be of use in Catalonia. The report discusses on the role of research universities as important players in larger innovation ecosystems, the economic impact of UC on California, specific examples of university-private sector engagement, and relevant UC policies that set what we call the “rules of engagement” that both encourage economic engagement and protect academic freedom and university autonomy.

The report includes the analysis of the UC's research portfolio and its economic impact on California, the role of UC in the economic progress of the region, and the policies of the UC and its administrative structures - incentives and rules of commitment. Finally, the study reflects on the differences and similarities between the public systems of Higher Education of California and Catalonia.

The work is partly the result of a visit to California from the ACUP and the Catalan Government. The ACUP annually promotes work visits abroad to learn about the most advanced HE systems such as Massachusetts, Israel, Denmark, Ireland and Austria.