Higher education leaders from Latin America and the Caribbean met at the International Conference of States, on July 11, 2019, held at the San Martín Palace in Buenos Aires, Argentina, to approve the new Convention for the Recognition of Studies, Degrees and Diplomas in Higher Education in Latin America and the Caribbean. This is a fundamental instrument for harmonizing and guaranteeing fair and non-discriminatory recognition procedures among the States Parties in order to facilitate student academic mobility, an intention that is part of the Sustainable Development Goal 4 and the global commitment to «leave no one behind». 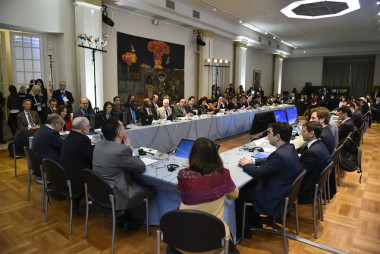 The first day began with welcoming remarks by Jorge Faurie, Minister of Foreign Affairs and Worship of Argentina, who ratified the importance of the Conference: «The region understood that it was necessary to renew the Convention. I urge you to achieve it. Our country has always given an important role to education, an instrument to increase learning opportunities for students and researchers”. He also expressed his wish to present the Convention at the UNESCO 40th General Conference that will take place in November 2019, at the headquarters of the organization.

Borhene Chakroun, director of the UNESCO Division for Policies and Lifelong Learning Systems, took the floor to thank the Argentine government for the political and logistical support in the materialization of the event, and recalled that Latin America and the Caribbean (LAC) was the first region to approve, in 1974, a regional convention for the recognition of studies, degrees and diplomas.

In Argentina we give importance to the strategic relevance of education (..) and reaffirm higher education as a public asset, a human right and a duty of the State. International cooperation is of the utmost importance for us,» said Alejandro Finocchiaro, Minister of Education, Culture, Science and Technology of Argentina, to the representatives of the States Parties, international institutes and observers. He also made mention to Argentina’s participation in previous events such as the Meeting of Ministers in 2017, and the Regional Conference on Higher Education (CRES) in 2018.

Organized by the UNESCO International Institute for Higher Education in Latin America and the Caribbean (IESALC), with the support of the Argentine government, the Conference gives closure to the Convention’s modernization process, led since 2015 by the Institute, and which consisted of working sessions and intergovernmental consultation meetings around the original text.

Francesc Pedró, director of IESALC, confirmed in his welcome speech the commitment of the Institute to support the implementation of the renewed Convention, reaffirming its mission as a specialized organization of UNESCO, with the mandate to collaborate with the region’s governments in the achievement of their goals concerning higher education. «This will be carried out through actions that include strategies for the approach and technical assistance for the Convention’s applicability; development of tools to facilitate its operationalization; the establishment of partnerships to share experiences and good practices; participation spaces for higher education institutions, as well as articulation between them and governments in relation to the recognition of titles and related topics; and monitoring the effects of the Convention on academic mobility”, he said.

The detailed revision of the text of the new Convention will culminate on Saturday, July 13, with its adoption and the Declaration of the Conference. Additionally, the Sistema Iberoamericano de Aseguramiento de la Calidad en la Educación Superior-SIACES (Ibero-American System of Quality Assurance in Higher Education) will participate with an exhibition on good practices in the accreditation of the quality of HE in the Region and the consideration of common technical aspects. At the end, Borhene Chakroun will speak the closing words of the meeting.