The 7th Higher Education in the World Report (HEIW7) “Humanities and Higher Education: Synergies between Science, Technology and Humanities” was presented on December 10th 2019 in Barcelona in an open event at CaixaForum Barcelona.

The new GUNi World Report analyses the role of humanities in higher education and their interrelations with science and technology. The Report is structured around 24 key questions and it includes contributions from 130 international authors. It is available on this link. 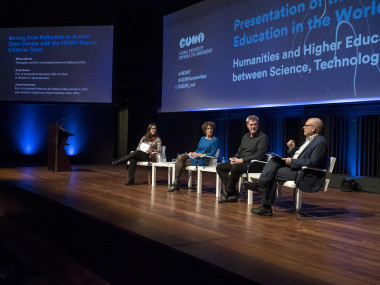 Societies are witnessing profound changes with clear implications for the future; these environmental, scientific, technological, cultural and social transformations are presenting transcendental challenges in terms of thinking and rethinking the meaning and value of human experience, and even of what it means to be human. These challenges can only be tackled through a holistic approach involving the humanities, science and technology. Together, they must necessarily play their part as both drivers and critics within the framework of these transformations.

With contributions from 130 experts from around the world, the 7th Higher Education in the World Report Humanities and Higher Education: Synergies between Science, Technology and Humanities (HEIW7) aims to provide the academic community, policymakers and decision-makers within higher education and wider society with a diagnosis and analysis of the current state of affairs, and offer proposals that can broaden our horizons towards a much needed integrated approach to knowledge.
The presentation, attended by 130 people, counted on the keynote speech "How to Humanize Humans in an Inhuman Age?" given by Rob Riemen, Writer and Founder of the Nexus Institute; and on the debate facilitated by Irene Lapuente (La Mandarina de Newton) with the Editorial Team of the Report composed by Marina Garcés, David Bueno and Josep Casanovas.

Josep M. Vilalta, GUNi Director and ACUP Executive Secretary, presented the Report, wherein 130 international authors have contributed to a dissection of the topic and the identification of good practices that can help academic leaders and policy-makers to realize the highest purposes of education and research.

The Higher Education in the World (HEIW) Reports

Higher Education in the World (HEIW) is a collective work published as part of the GUNi Series on the Social Commitment of Universities. It is the result of a global and regional analysis of higher education in the world. With a specific subject chosen for each edition, the Report reflects on the key issues and challenges facing higher education and its institutions in the 21st century. GUNi has published seven issues of Higher Education in the World Report (HEIW). More than 510 internationally renewed authors from 97 countries have contributed in the GUNi Reports and 19.000 copies have been distributed in 130 countries.