Launch and presentation of the 6th GUNi Report in Barcelona

The 6th Higher Education in the World report "Towards a Socially Responsible University: Balancing the Global and the Local" was presented last Friday 10th March in Barcelona in front of a full Auditorium in the emblematic building of La Pedrera.

The edition of the 6th HEIW report focuses on the social compromise of universities at a local and global scale, and highlights that the university model of the 21st century must be socially responsible and go beyond strictly educational aspects. 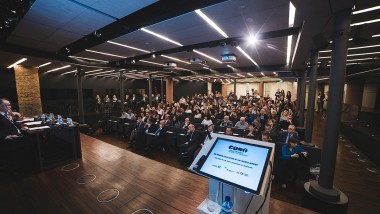 During the presentation, Francesc Xavier Grau, academic director of the report, stated that the aim of this publication is "to facilitate reflection on the emerging problems and challenges of higher education in the world. There is a correlation between the wealth of a society and its evolution in the field of knowledge and universities have a very important role in the competitiveness of nations". The president of the Fundación Cultura de Paz, Federico Mayor Zaragoza, also stated that higher education "has responsibilities that until now have not been known to put into practice", alluding to social responsibilities and often "confused education with training". In this context, the Director General for Multilateral and European Affairs of the Government of Catalonia, Manuel Manonelles, stressed that in the current context "it is necessary to promote an education that builds critical citizens capable of facing a complex reality".

The presentation also involved the President of GUNi and ACUP, Jaume Casals; the Secretary for Universities and Research of the Generalitat, Arcadi Navarro; the Secretary of the Barcelona Municipal School Council, Albert Pérez, and the members of the Editorial Team, John Goddard and Budd Hall.

86 experts from 28 countries have contributed to a dissection of the topic in the report and the identification of good practices that can help academic leaders and policy-makers to realize the highest purposes of education and research. This edition is offered in two formats; a printed reduced version and a full version available on open access.

Presentation of the 6th GUNi Report in Barcelona from guni on Vimeo.