The Rector of the Universitat de Lleida (UdL), Jaume Puy, has been appointed President of the Catalan Association of Public Universities (ACUP) and GUNi President for one year. Together with Peter Wells, Chief of the Section for Higher Education at the UNESCO Headquarters in Paris, he has begun to be part of the GUNi Executive Committee. 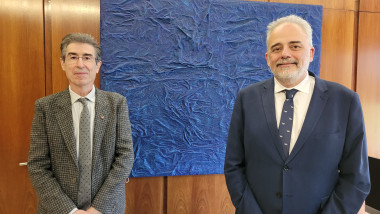 Last February 8th, the new Directive Board of the Catalan Association of Public Universities (ACUP) was established. Jaume Puy, Rector of the Universitat de Lleida (UdL), has been elected President of ACUP. Therefore, he has become the GUNi President for 2022. In this way, Jaume Puy takes over Javier Lafuente, Rector of the Univesitat Autònoma de Barcelona (UAB) as GUNi President.

Jaume Puy Llorens is Full professor at the University of Lleida since 2002, Dr. Jaume Puy earned his PhD in Chemistry at the University of Barcelona in 1985. Late in 1986, he became member of the Chemistry Department at the School of Agrifood and Forestry Science and Engineering (ETSEA; then belonging to the Polytechnic University of Catalonia and since 1991 part of the University of Lleida). He has taught Chemistry, Physical Chemistry, Analytical Chemistry and Environmental Chemistry at all levels on various degrees at the ETSEA, and has coordinated several PhD programmes. Regarding basic research, he has conducted his work in the field of Environmental Chemistry. His most relevant contributions have focused on the development of electrochemical techniques and passive samplers as analytical methods to measure the availability of metallic cations, anions, nanomaterials and organic contaminants in natural environments, and on building a theoretical framework to understand the processes of nutrition and toxicity. He has participated in 12 projects funded by the Spanish government plus 5 funded by the European Union. In applied research, he has worked in the agrifood sector. His main contributions include setting up networks of NIR spectroscopy equipment and multivariate techniques for the rapid analysis of agrifood product quality. He has been responsible for several contracts with companies, CDTI (Spanish Government centre for industrial technology) and PETRI (research transfer) projects. He has carried out all his research activity as member of the UdL Environmental Physical Chemistry Group, recognised as an established research group by the Catalan Government since 1995, of which he has been co-ordinator. He has published more than 130 scientific papers and has six positively evaluated six-year terms under the Spanish research assessment system. He collaborates with several national and international assessment agencies, the editorial boards of various journals, advisory committees and research networks, and has organised several conferences including IAP2016, held in Lleida, which gathered 225 participants from all over the world. Finally, responsible for the Elementary Analysis Service at the University of Lleida since 2006, he has provided services to regional research groups and companies. Regarding management, he has been deputy director at the ETSEA (89-91 and 94-96), secretary (93-94) and director (2004-2010) at the Chemistry Department, and vice-rector for Research of the University of  Lleida (2011-2019). Dr Puy is currently rector of the University of Lleida since 22 May 2019.