The 2nd TeRRIFICA Reflective Workshop was held in Belgrade on the 10th and 11th July 2019. It was a joint activity with the “Science Meets Parliaments” event hosted at the National Assembly of the Republic of Serbia. The TeRRIFICA team met the day after to the workshop to celebrate an internal Consortium meeting.

This second workshop focused on Key Performance Indicators (KPIs) and its meaning for climate action. The six TeRRIFICA pilot regions in Belarus, France, Germany, Poland, Serbia and Spain, were presented at the event on merging pilot regions topic-wise: air, agriculture, water and temperature.

The workshop was organized by the Center for the Promotion of Science within the framework of the H2020 TeRRIFICA project, whereby eight European institutions work together to foster competence for climate change adaptation and mitigation in different European regions with a specific focus on Responsible Research and Innovation. Through ACUP, GUNi is member of the TeRRIFICA consortium and is in charge of the Communication and Dissemination of the project. ACUP will also lead the pilot activities organized within the project in the metropolitan area of Barcelona. 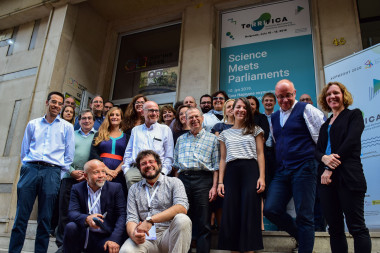 After a successful 1st TeRRIFICA Reflective Workshop, TeRRIFICA held the 2nd TeRRIFICA Reflective Workshop at the National Assembly of the Republic of Serbia on July 10th and 11th. This workshop was part of the ‘Science Meets Parliaments’, event organized for the first time in Serbia by the Center for the Promotion of Science in collaboration with the Ministry of Education, Science and Technological Development, and under the patronage of the Joint Research Centrе (JRC) of the European Commission.

This second workshop focused on Key Performance Indicators (KPIs) and their meaning for climate action. What does success look like in TeRRIFICA? How can the Theory of Change be used in the development, implementation and evaluation of TeRRIFICA? These and other issues were addressed to prove for stakeholder perspectives on what ‘success’ looks like for the project. The workshop was facilitated in a manner similar to the first reflective workshop, as a series of concurrent focus groups with partner representatives as moderators. The discussions will be used as data pool for the identification of potential indicators that are not already accounted for in the MoRRI indicators or other existing metrics considered for use in the project. The discussion will be analysed to identify additional variables and KPIs that could be defined based on this bottom-up perspective from stakeholders. The results of the workshop will be used to expand the KPI scope beyond the MoRRI indicators.

The TeRRIFICA Consortium meets in Belgrade: experiences on RRI and Climate Action

The TeRRIFICA team met the day after the workshop to celebrate an internal Consortium meeting. Representatives from the consortium institutions, together with members of the TeRRIFICA Advisory Boards, gathered in the premises of the Center for the Promotion of Science in Belgrade for the meeting.

Among other aspects, the meeting focused on the TeRRIFICA crowdmapping tool, to be launched on September 2019, and the forthcoming 2nd TeRRIFICA Online Conference, which will be held on the 19th September 2019.

Other issues that were discussed are the active dissemination strategy of TeRRIFICA, available on www.terrifica.eu, and the increasing engagement in the TeRRIFICA main communication channels was celebrated as well.