In the framework of TeRRIFICA , the pilot regions of the project have organized a series of capacity building workshops, also known as 'Social Methodology Labs', in order to deepen into the area of conflict management and learn more about the "Design Thinking" approach. 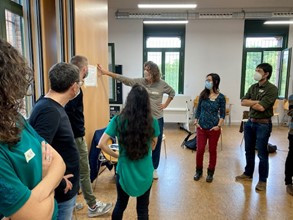 Developing and implementing climate actions probably automatically causes conflicts – sometimes on a very small level (e.g. anger among garden owners due to water consumption restrictions), sometimes on a big level (e.g. claims by companies because of planned regulations regarding non-returnable packaging). Are there possibilities to anticipate smouldering conflicts and act pro-actively? What strategies can we use to handle already existing, open conflicts? And how can we optimize our future work to overcome and avoid conflicts and better invest the resources and energy into the needed climate actions?

The Social Methodology Labs (SMLs) mainly served as capacity building events in the area of conflict management. In 2020, a concept was developed that considered the pandemic situation. Thus, the SMLs were implemented in three phases and included the idea of “train-the-trainer”: The first SML was addressed to TeRRIFICA consortium members and close partners and gave an overview of relevant aspects around the topic “conflict management”. Based on this, in the second SML series every pilot region team organised one individual workshop focusing on the local needs. Finally, in the last SML phase, another workshop was offered to the members of the TeRRIFICA consortium to learn more about the “Design Thinking” approach, in order to transfer these learnings into the pilot region work and the overall project work.

The first Social Methodology Lab workshop took place on 4th February 2021 as an online event. The well experienced coach Dr. Merjam Wakili facilitated the full-day workshop on “Talking about conflicts”. Two people from each pilot region team plus two representatives of the project coordination team joined the project internal workshop, which allowed all participants to dive deeply into the topic of conflicts: What is a conflict?, What indicates latent conflicts?, How to achieve conflict competence?, Solutions to react on conflicts (Gibbs Reflective Cycle, Restorative Circles), How to pro-actively face critical incidents? (Harvard Model of Negotiation), The attitude and the mindset of a facilitator, The art of powerful questions, Cognitive bias,Insights into Design Thinking and the TheoryU concept and Listening and the Contemplative Dyads.

Based on the experiences of the first SML workshop, every pilot region team organised an individual 2nd SML workshop specifically aligned with the needs of the regional stakeholder. Thus, the focus of the workshops were set on different aspects, ranging from capacity building for facilitating co-creation processes, and anticipating potential conflicts, to “classical” conflict management workshops with a variety of stakeholder groups:

The last SML workshop was intended to introduce the TeRRIFICA project partners to a new approach – the Design Thinking – in order to get impulses for the future work in the six pilot regions and within the whole project. The half-day workshop was hosted online on 3rd December 2021 by the external coach Timo Fuchs with experience in the combination of Design Thinking and Climate Action. The used meeting platform SpatialChat allowed intense one-to-one working phases that alternated with short theoretical inputs. Key learnings from the workshop were that restrictions or disadvantages of online settings seem to become less and less. Additionally, if you deliberately change your wording, this can change the way you think!

If you want to stay informed about TeRRIFICA, please visit www.terrifica.eu, subscribe to the project's newsletter and follow our Social Media channels: