The Institute for Research on University and Education of the National Autonomous University of Mexico (UNAM) and the Global University Network for Innovation (GUNi) have signed a new collaboration agreement. Through it, the IISUE is established as the official headquarters of the regional office of GUNi for Latin America & the Caribbean (GUNi-LAC).

Both institutions also organized the Round table "Humanities and Higher Education: generating synergies between Science, Technology and Humanities" in the framework of the forthcoming 7th Higher Education in the World Report HEIW7. 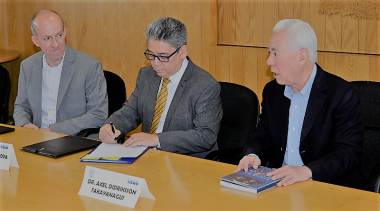 The Institute for Research on University and Education (in Spanish Instituto de Investigaciones sobre la Universidad y la Educación, IISUE) of the National Autonomous University of Mexico (UNAM) and the Global University Network for Innovation (GUNi) signed a collaboration agreement last March 6th 2019 in Mexico City. Through this collaboration agreement, the IISUE was established as the official headquarters of the regional office of GUNi for Latin America & the Caribbean (GUNi-LAC).

Dr. Hugo Casanova Cardiel, Director of the IISUE and Josep M. Vilalta, Director of GUNi signed the agreement. Dr. Axel Didriksson, researcher of the IISUE, Coordinator of the UNESCO Chair in Regional Integration and University, and since 2012 Regional President of GUNi LAC introduced the signing ceremony.

Dr. Guillermo Estrada Adán, Academic Secretary of the Humanities Coordination Unit (UNAM), other members of the GUNi Secretariat and researchers and doctoral students from the IISUE were also invited to attend the event.

The final objective of the collaboration agreement is “to jointly carry out the development of projects and academic, scientific and cultural activities in areas of common interest" and to strengthen the network in the region.

In the framework of the signature of this new agreement, the IISUE together with the Humanities Coordination Unit of the National Autonomous University of Mexico (UNAM) organized the round table “Humanities and Higher Education: Generating Synergies between Science, Technology and Humanities” on March 7 at the Dr. Jorge Carpizo Auditory in in Mexico City. Dr. Axel Didriksson chaired the session with interventions by Josep M. Vilalta, Dr. María Elena Álvarez Buylla (Director of the National Science and Technology Council of Mexico, CONACyT) and Dr. Domingo Alberto Vital (Humanities Coordinator, UNAM). Josep M. Vilalta was the first speaker and devoted his speech to explain GUNi and the upcoming 7th edition of the Higher Education in the World Report on the topic of the future of humanities and the necessary synergies between humanities, science and technology. He explained the conceptual framework, the reasons why GUNi has chosen the timely topic and the preliminary structure of the report.

Vilalta explained that we are concerned with the future of humanities in a time of deep transformations (scientific, technologic, environmental, political, cultural and social) and that we should not rely on extremist perspectives on humanities (the “catastrophic” or the “protectionist”). Instead, we should be able to build dynamic knowledge(s) that can interact and work in a transdisciplinary way in order to deal with our world’s challenges.

Dr. Álvarez Buylla’s speech emphasized the new orientation of the CONACyT, the advisory entity of the Mexico Federal Executive whose role is to articulate the public policies of the federal government and to promote the development of scientific research, technological development and innovation. Through the newly reorientation of the Council, science will be committed to society and the environment through citizen science and the concepts of ethics and responsible research and innovation. The importance of humanities will also be at the core of the Council’s policies.

Dr. Domingo Alberto Vital closed the roundtable by emphasizing the critical and dynamic role of humanities and the importance of building the sense of human experience through them in a time of change.

The audience showed a great interest in the topic and could interact with the speakers at the end of the event with questions ranging from the new policies of the CONACyT, questions of funding, the role of indigenous knowledge and oral knowledge in science and other relevant questions.