GUNi is working on the elaboration and edition of a “Special Issue” of the GUNi Higher Education in the World Report series, GUNi’s flagship project, called “GUNi World Report-Special Issue - New Visions for Higher Education Institutions towards 2030”. This Report will be officially presented and launched at the UNESCO World Higher Education Conference 2022 (WHEC2022) in Barcelona and will constitute the springboard to the GUNi International Call For Action (2021-2025) project. 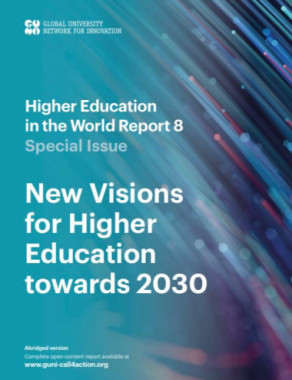 About the GUNi International Call for Action (2022–2025) project: “Rethinking HEIs for Sustainable and Inclusive Societies”
The “GUNi International Call for Action (2022–2025): Rethinking HEIs for Sustainable and Inclusive Societies” project seeks to open up the debate on the future of higher education institutions in the current decade, provide new and inspiring visions for HEIs, and guide and support them in their transformation to become more relevant, inclusive, sustainable, innovative and socially responsible. The project has a mid-term vision and will run, initially, from 2022 to 2025. Its stepping stone will be the coordination, preparation and edition of a special issue of the GUNi Higher Education in the World Report series, GUNi’s flagship project, under the title “GUNi World Report – Special Issue – New Visions for Higher Education Institutions towards 2030”. The report will be presented in the framework of the 3rd World Conference on Higher Education in 2022 and will be the basis for the following GUNi activities and initiatives to foster debate around the globe, support HEIs and promote capacity building.

The GUNi World Report Special Issue
GUNi’s flagship project is the edition of the GUNi Higher Education in the World Series, a project that after seven editions plus a synthesis for the 2nd UNESCO World Conference on Higher Education has become a benchmark in the higher education sector. Now, in the framework of the WHEC2022 and the current state of affairs, we believe in the need to edit a special issue of the report that is not focused on a single topic like the previous reports, but covers a broader view of higher education globally and provides a renewed vision towards 2030.

The report will have three main parts. The first part will analyse the current context, global trends and their implications for HEIs, and it will present a new vision for HEIs. The second part called “Transitions” will seek to analyse and describe how we could move towards this new vision by approaching  core issues and themes in higher education. Finally, the third part will seek to provide a regional approach with chapters on six regions focusing on the questions: What do the regions of our world feel higher education institutions should be like in the future? What are the similarities? What are the differences?