GUNi at the UNESCO UNITWIN 25th anniversary; looking ahead to the future 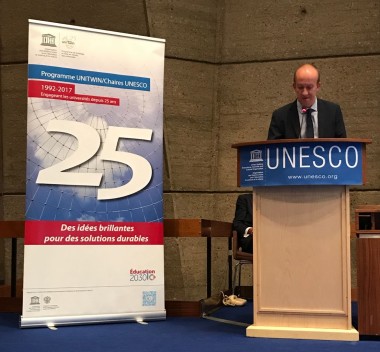 Within the framework of the 39th UNESCO General Conference, GUNi has participated today at the UNITWIN 25th anniversary by the hand of Josep M. Vilalta, director of GUNi and executive-secretary of ACUP. This celebration has provided an opportunity to review the achievements of the UNITWIN Programme over 25 years of action and to look forward to the contribution of UNESCO Chairs and UNITWIN Networks to the 2030 Agenda for Sustainable Development. It has brought together UNESCO Chairholders, Network Coordinators and other key UNITWIN actors.

In this special event, hosted at the UNESCO headquarters in Paris, Josep M. Vilalta has stated that "the GUNi network develops projects and promotes initiatives such as International Conferences, seminars and workshops on topics of interest, and conducts reports and studies on specific topics and performs a significant role in disseminating practical knowledge in university policy and management". Particularly noteworthy is the work of GUNi’s regional offices, organized in the regions of Africa, Asia and The Pacific, Latin America and The Caribbean, Arab States, Europe and North America.

In addition to the GUNi Higher Education World Reports, Vilalta has emphasized the importance of the last International Conference organized by GUNi which was held a month ago in Barcelona: The International Conference on Sustainable Development Goals: Actors and Implementation. It brought together more than 200 people from 21 countries to analyse the interrelations between the various actors in the implementation of the SDGs and the strategic role of knowledge and universities in the 2030 Agenda, as a strategic line of work for the GUNi network.

GUNi's director has also shared with the audience the commitment to strengthen the role of higher education in society contributing to the renewal of the visions and policies of higher education across the world under a vision of public service, relevance and social responsibility; "I would like to express our firm commitment to UNESCO founding values which, from my view, should strengthen truly transformative projects. Such projects must empower societies and individuals to construct a more just, more solidary and more educated world. In GUNi, you will always find an ally with these values and the willingness to transform our world for the better."

GUNi and UNESCO:
The Global University Network for Innovation (GUNi) is an International network created in 1999 and supported by the UNESCO, the United Nations University (UNU) and the Catalan Association of Public Universities (ACUP), which hosts its secretariat and presidency. GUNi was created within the framework of the UNITWIN/UNESCO Chairs Programme, by UNESCO, UNU and the Polytechnic University of Catalonia-BarcelonaTech (UPC) after UNESCO's World Conference on Higher Education (WCHE) in 1998 to give continuity to, and facilitate the implementation of its main decisions. Today, more than 210 institutions from 78 countries are part of the GUNi network, including higher education institutions, UNESCO Chairs, research centres and networks related to policy and management in higher education.