GUNi and HEIRRI at the European Social Responsibility Days, good practices in Europe and future challenges

GUNi has participated at the European Social Responsibility Days (#EUSRdays), hosted yesterday and today at the European Parliament in Brussels and the Université Libre de Bruxelles (ULB).

GUNi has presented the EC-funded HEIRRI, the 6th GUNi report 'Towards a Socialy Responsible University - balancing the Global with the Local' and the GUNi's strategic lines to strengthen the role of higher education in society. 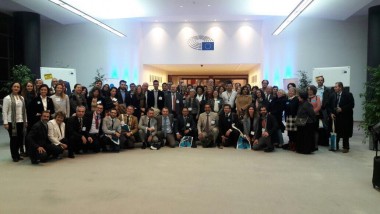 CONEXX-Europe, as coordinator of the European project USR-Net - European Network of Socially Responsible Universities - and with the collaboration of the UNESCO Regional Observatory for Social Responsibility for the Caribbean and Latin America (ORSALC), has organized two events under the European Social Responsibility Days (#EUSRdays) mark that have taken place on the days:
- 9 November 2017, from 15:00 to 18:00 hours, at the European Parliament in Brussels
- 10 November 2017, from 10:00 a.m. to 4:00 p.m., at the Université Libre de Bruxelles (ULB)

It has been an important occasion to discuss social responsibility in universities and promote their strategic value for territorial development.

GUNi has been present at the events by the hand of Josep M. Vilalta, director of GUNi and executive-secretary of ACUP, and Alicia Betts, head of projects at GUNi and ACUP. Josep M. Vilalta has presented the 6th GUNi report 'Towards a Socialy Responsible University - balancing the Global with the Local' and has emphasized the GUNi's commitment to strengthen the role of higher education in society contributing to the renewal of the visions and policies of higher education across the world under a vision of public service.

Around 70 representatives from European universities and university networks, teachers, researchers, students and consortium of European projects on university social responsibility attended the event.