"Globalization pushes us to regionalization and universities have a central role in this process” Prof. Francesc Xavier Grau said

During the seminar “Territorial Competitiveness and Universities” stakeholders highlighted the role of universities in the implementation of the RIS3 and promoted better cooperation in order to improve strategies on this issue. 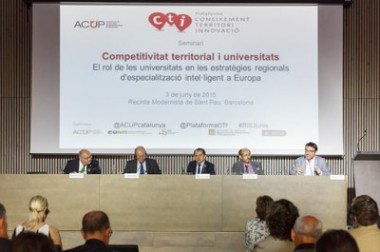 The seminar focused on the increasing role of universities regarding the economic, social, technological and cultural development of the regions, with the new Cohesion policy framework place specialisation strategies (RIS3) and how currently they have the opportunity to create a network together with the business sector, to maximize the use of European Structural and Investment Funds (ESIF) in R+D+I activities. Speakers and attendees delved into these issues stressing the importance of governance of the individual stakeholders and the partnerships created.

GUNi’s president Enric Fossas opened the Seminar, and was followed by the speech of Wolfgang Streitenberger, Advisor-Conseiller in the Directorate General "Regional and Urban Policy" of the European Comission which explained how higher education institutions can help to promote territories.

After the presentations, the event was structured in two main panels. First, it was held the round table “European regional policy and the strategic role of universities. Current status”. During this debate, John Goddard, Emeritus Professor of Regional Development, Newcastle University and member of the editorial team of the 6th GUNi Report, argued that "regional governments have not fully understood the importance of universities for territory" and stressed the idea that the development of the territory depends on the quadruple helix which are: Universities, business, civil society and public administration.

At the second round table, Implementing RIS3 in regions and cities of Europe, speakers exposed particular cases from various European regions such as Finland, Greece, Scotland, Basque Country and Catalonia. After the presentations, it was organized three groups in which participants discussed specifics issues in order to identify solutions and propose ways to put ideas into practice.

To conclude the seminar, the Non-Executive Director of GUNi, Francesc Xavier Grau, highlighted that "globalization pushes us to regionalization and universities have a central role in this process. Finally, Wolfgang Streitenberger , claimed that "instead of constant complaint, it should add value in the work done by universities.”

This event has been promoted in the framework of the activities of the (Plataforma CTI) and organized by GUNi, the Catalan Association of Public Universities (ACUP), and the Smart Specialisation Platform (S3Platform) of the European Commission.