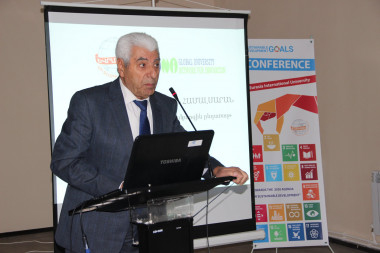 The EIU Rector, professor Suren Ohanyan noted, that we live in an ever-evolving world and dramatic shifts exist everywhere. These changes are alarming and pose a treat for sustainable development. As education providers, we are obliged to contribute to the development of the UNDP Sustainable Development goals:  this conference will be held by EIU on a yearly bases fostering the networking and facilitating research and discussions on the role that higher education should play in this domain.  According to Haykuhi Gevorgyan, candidate of mathematical science and the head of professional orientation and skills development center of the RA Ministry of Labor and Social Affairs, “The introduction of professional orientation and career guiding stable system in the country may have an impact on both poverty reduction and the sustainable development of the economy and human resources. .In contrast to traditional professional orientation approaches, the development of universal core skills in entrepreneurship, decision making, and teamwork is encouraged today.  According to MS Gevorgyan noted that the frequently used expression of the “Right Choice of Profession” is not very precise and it is necessary to apply the concept of “Conscious Choice of Profession” ensuring that it may be changed and modified throughout the lifetime”.

Karine Danielyan, doctor of geographical science, professor and the Chairman of Ecology and sustainable development department at the Armenian State Pedagogical University  noted: “The demands we present to the planet today are ten times more, than the planet  may serve without disturbing it’s balance. We can no longer continue this approach”. Ms. Danielyan also noted, that, based on the analysis of UN experts and data, the  ecologic crisis is deepening as a result of  social crisis.”

Number of reports and studies were later presented on the topic by researchers, which was followed by discussions.

Among the major outcomes of the conference was the decision of recommendation to be provided to the Ministry of Education, Science, Culture and Sports, to revise the national Qualification Framework (NQF) including requirements and descriptors on the Green skills and competences. This particularly was given a high importance, taking into consideration the national and international commitments, the adopted national vision of “Building Green Economy” and the role that Higher education should play in educating future responsible leaders, workforce and consumers.