Cooperation and Policies in the realm of Cultural Heritage, Cultural Routes, and their relevance for the Bi-regional Partnership between the EU and LAC

The EU-LAC Foundation and the Peruvian Ministries of Foreign Affairs and of Culture cordially invite to the II EU-LAC Dialogues Sessions „Cooperation and Policies in the realm of Cultural Heritage, Cultural Routes, and their relevance for the Bi-regional Partnership between the European Union, Latin America and the Caribbean“, to be held on 17-18 February 2022 virtually. 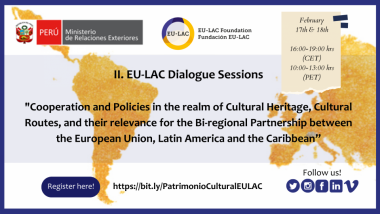 The concept of Cultural Routes has gained increasing recognition over the last decades, in the field of culture, heritage and tourism. In 1993, following the inclusion of the Camino de Santiago in the UNESCO World Heritage list, the International Council of Monuments and Sites (ICOMOS) raised the need to define the new category of Cultural Itinerary that until then had not been contemplated in the Operational Guidelines of the World Heritage Convention, Cultural and Natural of 1972.

According to the "Charter on Cultural Routes" ratified by the General Assembly of ICOMOS in 2008, a 'Cultural Route' is understood as “Any route of communication, be it land, water, or some other type, which is physically delimited and is also characterized by having its own specific dynamic and historic functionality to serve a specific and well-determined purpose”.

The Convention on the Value of Cultural Heritage for Society, better known as Faro Convention (2005), also constitutes a frame of reference in this realm, especially due to the importance it shifts to the value of cultural heritage for societies as well as its role in the integration of cultural, ecological, economic and socio-political development.

The 45 Council of Europe Cultural Routes involving more than 60 countries genuinely represent the diverse and rich heritage of the region, allow cultural and educational exchanges, and have become key resources to enhance the history and memory, architecture, artistic and cultural expressions, gastronomy, as well as landscapes shared by different populations.

In Latin America and the Caribbean, cultural routes such as the Camino Real de Tierra Adentro (Mexico), which represents one of several important sections of the Camino Real Intercontinental, the Estrada Real (Brazil), the Tapé Aviru (Guaraní road system crossing Paraguay, Bolivia, Brazil), the Jesuit Way (Argentina, Bolivia, Brazil, Paraguay, Uruguay), the Slave Route (referring to the slave trade between Africa, the Caribbean, and the Americas), or the Gaucho Road (Argentina, Uruguay, Brazil).

In the Andean region there is an important experience in the management of a road system – the Qhapaq Ñan – which is shared by six countries: Argentina, Bolivia, Chile, Colombia, Ecuador, and Peru. On 21 June 2014, the Qhapaq Ñan was inscribed on UNESCO's World Heritage List, in the Cultural Itinerary category, and has been widely recognised as an example of international cooperation among the countries that comprise it.

In light of the relevance of the issue, the Organisation of Ibero-American States for Education, Science and Culture (OEI) and the European Institute of Cultural Routes (EICR) recently initiated a cooperation alliance to promote a Euro-Ibero-American programme in this field.

Based on the above, the virtual II EU-LAC Dialogue Sessions seek to advance a bi-regional dialogue on intangible cultural heritage and, more specifically, on cultural routes as an instrument to make visible the importance of relations and cooperation between the European Union and Latin America and the Caribbean, particularly in the field of culture, as well as to account for the potential of heritage and cultural routes as a means to address challenges related to the COVID-19 pandemic, climate change and digitisation, among others. To this end, the sessions will focus on policies and cooperation programmes in the areas managed by international organisations and countries, as well as on the exchange of experiences with the management of cultural routes among their managing entities.