· The GUNi International Conference put the Agenda 2030 at the centre of the work of universities towards sustainable development and social transformation.

· One of the outputs will be a report with articles on the topics discussed at the Conference to share with those interested in the development of the 2030 Agenda and the SDGs implementation. The Report will be available exclusively in digital format on this website by January 2018. 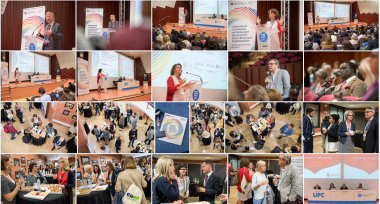 Held in Barcelona from 18th to 19th September 2017, the International Conference on Sustainable Development Goals: actors and implementation gathered multidisciplinary experts and high-level practitioners from around the world to exchange knowledge, ideas, experiences and expectations around the challenges involved with the SDGs.

The Conference counted on the participation of 220 attendees and around 70 speakers from 21 countries around the world. During two days, the debate on the implementation of the SDGs was discussed with the presence of all the agents involved: universities, governments, cities, companies and public and social entities.

The line-up of keynote speakers was composed by Rolf Tarrach, president of the European University Association (USA); Sijbolt Noorda, president of the Observatory of the Magna Charta (Bologna) and the Academic Cooperation Association (Brussels); Teresa Ribera, director of the Institute for Sustainable Development and International Relations (IDDRI) of the SciencesPo University; Jordi Pigem, ex-lecturer and coordinator of the Philosophy module of the Master's in holistic science at Schumacher College and Namhla Mniki-Mangaliso, director of the African Monitor.

Josep M. Vilalta, GUNi Director and Executive Secretary of the Catalan Association of Public Universities (ACUP), put the emphasis on the key role of universities in the achievement of SDGs. Most of participants and speakers agreed that a radical transformation is needed and the role of universities in this process cannot be a passive one. Universities were called to become a trigger of change, standing at the center of the debate and moving actors towards action. Only through the effective collaboration between governments and public agencies, universities and research centers, enterprises and NGOs the implementation of the SDGs will be a reality.

One of the outputs will be a report with articles on the topics discussed at the conference to share with the GUNi membership and networks, policymakers and those interested in the development of the 2030 Agenda and SDG implementation. The report will have one article for each parallel session and some articles about the keynote sessions. We hope that all those who participated in the Conference will be able to review the topics covered through the reading of this document and for those who could not attend they will have the opportunity to delve into the main issues debated. The publication will be part of the long-term GUNi SDGs project by which GUNi wants to be one of the leading spaces for research, debate and reflection on the implementation of SDGs. The Report will be available exclusively in digital format on the GUNi website by January 2018.

During the parallel session Designing the Future "SDGs and the Humanities", the new topic of the next Higher Education in the World Report was announced as well. GUNi is currently working on the edition of the Higher Education in the World Report 7 to be published in 2019. The HEIW7 will be devoted to the future of the humanities and the relation between science and humanities in the 21st Century.

The purpose of the Conference is to promote a multidisciplinary network and a permanent observatory on the role of knowledge, universities and scientific research on the implementation of the SDGs worldwide.