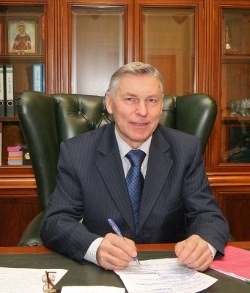 Vladimir M. Filippov is Rector of the Peoples’ Friendship University of Russia. Was twice elected deputy of the Moscow Council (Parliament) (1987-1993), was the Chairman of the Standing Committee of the Moscow Council (Parliament) on Ethnic Relations - a member of the Presidium of the Moscow Council (Parliament). From 1998 to 2004 was Minister of Education of the Russian Federation, as a part of four governments. He is author of nearly 230 scientific and methodical works, including - 30 books, two of which are translated and reprinted in the USA by the American Mathematical Society. In 2001 he was elected a corresponding member, in 2003 - a full member - academician, and in 2004 - a member of the Presidium of Russian Academy of Education. In 2003 he was elected a foreign member of Ukrainian Academy of Education.

In this interview Vladimir M. Filippov, Rector of the Peoples’ Friendship University of Russia, a GUNI Member institution, presents the university’s new projects to foster its social responsibility.

Today Peoples’ Friendship University of Russia is one of the leading state higher educational institutions of Russia. PFUR is a renowned research center well known both in Russia and abroad. More than 70 thousand graduates of the University work in 170 countries, among them more than 5000 holders of Ph.D. and Doctorate degrees.

The University is Russia’s only higher educational institution which has such multi-profile structure of faculties and specialties, typical for classical universities all over the world. Specialists are prepared in 62 lines of study and specialties at the following faculties: Engineering, Medical, Physical-mathematical and natural sciences, Law, Economic, Philological, Humanitarian and social sciences, Agricultural, Ecological.

As far back as in 1989, the University was the first to introduce the multilevel system of higher education (Bachelors- Masters). Currently there are about 28 thousand graduates and postgraduate students, attending physicians and probationers from 139 countries of the world at the University and its branches. They represent about 500 peoples and nationalities of countries of Asia, Africa, Latin America and Europe.

In the next 5 years, which topics related to social responsibility would your institution prioritize?

Double Degree (DD) Programs became one of the primary mechanisms of the People’s Friendship University of Russia integration into Bologna process. Due to these programs PFUR is undergoing considerable transformation to meeting the higher European educational standards; it develops numerous channels of cooperation with various European countries, USA and China. DD programs provide extremely tough forms of cooperation in the scientific-educational process; they give sustainable and long lasting partnerships.

The basic areas of cooperation on DD programs are international relations, political sciences, history, philosophy, economics, and linguistics. There are the programs on management in health care system and industrial enterprise development, on tourism and hospitality. All together these programs contribute into curricular innovation in higher education institutions and help in addressing major global challenges.

The advantages which our students get within one year of study in the international DD Programs are the following:

As the result DD Programs graduates have additional benefits in their employment careers: they enter European Union structures, international enterprises, state and municipal governmental bodies, Embassies and the Ministry of International Affairs. They become leaders of public and non-governmental organizations. Their skills and competences meet the highest demand in analytical, marketing and consultative structures, mass media, trade chambers and chambers of commerce, institutions of culture and higher education and in the research centers.

And what is the most crucial; by the work which they fulfill in different sectors of culture and economy they raise the quality of relationships between our countries.

The fifteen leading universities of the CIS member states have signed the Agreement on the Consortium on the establishment of the Network University of the Commonwealth of Independent States.

The main goal of the Consortium is an establishment of the CIS Network University as a system of international cooperation similar to the Erasmus program aimed at achieving the following objectives:

Some of the advantages of studying in the CIS Network University are:

Consortium members have concluded the Agreement on join training of Masters in different areas related to management, economics, law and Russian language, among others. Joint Education Programme of CIS Network University means Education programme jointly organized and implemented by partner universities. The students receive official recognition each of the partner universities where they completed the Joint programme.

The contents of the Joint Programme is determined by the curriculum agreed upon by the Partner Universities’ representatives, and considered an integral part of the Agreement on the Joint Master’s Training.

The activity of partner universities is coordinated with Steering Committee of the Consortium that also examines the application of higher educational institutes about the joining the Consortium.

Human Rights Masters Programme is a programme established by three Russian universities: Peoples’ Friendship University of Russia (PFUR), Moscow State Institute for International Relations (MGIMO) and Russian State University of Humanities (RGGU) – in partnership with the Office of the High Commissioner for Human Rights in the Russian Federation. This project presents a joint masters programme destined for those who intends to deal with human rights issues, to work in civil society organizations, government agencies and business.

The first academic year of the programme consisted of two semesters that included studying of mandatory disciplines of the Federal component, new specialized courses, round tables and master classes of the EIUC European professors. The second year project of the pilot stage of the Human Rights Masters Programme implementation is aimed at improving human rights education institutionalization in the Russian Federation by completing creation of unique model of human rights educational programme as an example for other Russian universities. This will allow reaching the main strategic project goal which is education of high-qualified experts for human rights promotion referring to the international standards, rules and principles.

The Masters programme is aimed at providing students with updated human rights knowledge and skills, developing more efficient European and international cooperation on this issue that will give universities the opportunity to train high-qualified experts and to contribute to human rights development and potential strengthening in the academic system; to strengthen human rights protection of vulnerable groups by human rights professional trainings; to improve situation in human rights respect while administering justice.

Multi-disciplinary approach allows adapting the educational process to different categories of students with different set of knowledge and prospects. In particular, students’ preparation for postgraduate education is supposed.

In your opinion, what are the two main barriers/difficulties that higher education must overcome to move towards a sustainable society?

Team Intercultural Dialogue
Joint action to improve the impact of university development cooperation: Catalan universities promote an University Development Cooperation Plan
The new agenda for the transformation of higher education in Latin America
Alexei Smirnov
The History of Spanish Universities from their origins in the 12th century