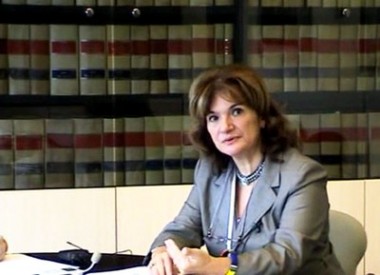 Stamenka Uvaliæ-Trumbiæ works for UNESCO (1990-present) as a senior programme specialist for higher education. She is presently head of the Section for Reform, Innovation and Quality Assurance, in the Higher Education Division at UNESCO’s headquarters in Paris. Prior to her work with UNESCO, she held various positions in education in the former Yugoslavia, the last being secretary-general and CEO of the Association of Universities of (the former) Yugoslavia. Her areas of expertise include UNESCO’s work on conventions, recommendations, codes of good practice and guidelines that relate to the recognition of qualifications and quality assurance in higher education. Within this framework, she was responsible for drawing up the 1997 Lisbon Convention on the Recognition of Qualifications in the European Region, the setting up in 1994 of the joint Council of Europe-UNESCO ENIC Network, the European Network of National Information Centres on Recognition and Mobility, and is secretary of the Intergovernmental Committee for the Mediterranean Convention on the Recognition of Qualifications. Her work and publications also include reviews of higher education systems in FYR Macedonia (SOROS/World Bank, 1994) Bosnia and Herzegovina (UNESCO/UNDP, 1996/1997), Serbia and Montenegro (UNESCO/UNICEF, 2000). Her more recent responsibilities are aimed at developing policy debates on cross-border higher education, which cover a wide range of issues, from distance education to trade in higher educational services, through the Global Forum on International Quality Assurance, Accreditation and the Recognition of Qualifications (2002 and 2004). One of the most recent outcomes of this work is the Guidelines on Quality Provision in Cross-Border Higher Education, prepared jointly with the OECD (2005), which promotes mutual trust and international cooperation in quality assurance and the recognition of qualifications, especially those provided across borders, such as distance education, e-learning and other forms of provision.

Chief of the Section for Reform, Innovation and Quality Assurance, in the Higher Education Division at UNESCO’s Headquarters, in Paris

Stamenka Uvalic-Trumbic talks to GUNI about the main challenges that higher education will face in the next year.

Stamenka Uvalic-Trumbic talked about how providing higher education for the growing demand of students coming from developing countries will be the most important challenge in the forthcoming years. Ms. Uvalic-Trumbic was the speaker during the discussion `The International Politics of Quality Assurance and Accreditation: From Legal Instruments to Communities of Practice´ at the “Third International Barcelona Conference on Higher Education: Accreditation for Quality Assurance: What is at Stake?”.

The next World Higher Education Conference is getting closer. Which do you think that are the main challenges that higher education will face in the next 10 years?

This is not an easy question to answer. However, I think that some of the challenges are quite clear because there is an enormous demand for higher education, especially in the developing world, but also a declining ability of states budgets and public higher education institutions to respond to that demand. This situation is the basis for the proliferation of new and non-traditional providers of higher education, including cross-border higher education.

At the same time, we can foresee a big growth in students’ enrolments and a great need to provide higher education for them in the short and medium term. According to estimates in OECD countries, 40 to 50 % age participation rates are needed in higher education to achieve developmental goals. Some developing countries are much below these percentages.. In Bangladesh, India and Pakistan the enrolment rate is between 8 and 12%, while in some African Sub-Saharan countries it is as low as 0.5 %. Based on the latest statistical data by the UNESCO Institute of Statistics some 132 million students including part-time students were enrolled in higher education institutions around the world, and that figure is likely to increase. Where do these millions of students that seek higher education go to?

Cross-border education providers are seen as one of the stakeholders for the higher education system in the next 10 years. Which other will be also acting?

Well, more and more we are looking at a lifelong education, because in the 21st Century diplomas don’t have the same value they had in the previous century. Diplomas are no longer a guarantee to get access to the labour market. Often they become obsolete. This whole lifelong learning process is going to be intensified: you will have different types of higher education provision at national level; you will have higher education institutions providing traditional courses, but there also will be courses through distance education and the Internet to reach a larger number of students.

From your point of view, which are the key aspects to ensure a quality higher education system in developing countries?

In fact, the key is to change the mindset of stakeholders as institutions, academic staff, students and also governments. About 80 countries in the world have some kind of quality assurance mechanism for higher education, but the big step is to engage all the stakeholders at institutional level, and change their mentality of how they evaluate their own quality.

On the one hand, universities staff need motivation and incentives to reach that goal. Sometimes universities are very conservative and they do not want to change, they do not see the value added by quality assurance, especially in poor countries, where salaries are low and professors think that the effort is too high in comparison to the benefits they receive. On the other hand, governmental funding and support is needed. Quality assurance is not cheap and, at this point, we also have to consider that there are countries that face so many other problems that defending quality is not among their highest priorities.

Finally, which are the main goals elaborated by UNESCO and OECD regarding the guidelines for quality in higher education? To whom are they directed?

The main objective is to protect students and parents when they choose the field of study and the institutions they want to study in. Although some of the cross-border providers are of good quality, often they also have a clearly commercial interest and some of them are just fraudulent institutions. Therefore, since UNESCO’s concern is to protect students in developing countries, the Guidelines were elaborated to provide an international framework to inspire national policy and regulation and promote cooperation in quality assurance between providers and receivers of cross-border higher education., The guidelines are focused on the quality of institutions and programmes provided across borders that also include distance education and e-learning. So, its basic goal is to reach collaboration between importing and exporting countries, assuring that there is a comparable quality standard.

The Guidelines address six different stakeholders in higher education: one of them are the already mentioned students bodies. Others are governments, higher education institutions, quality assurance agencies, professional bodies, and bodies that deal with the recognition of qualifications. It is important that students know that institutions where they will study will provide qualifications and diplomas that are recognized.