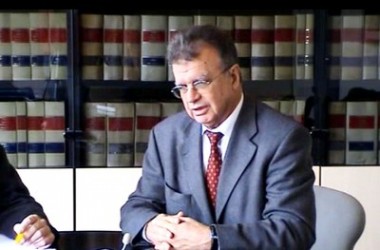 Marco Antonio Rodrigues Dias, United Nations University representative in UNESCO, is a Brazilian. Holder of a BS in law by Federal University of Minas Gerais (1964), a certificate in Philosophy in Rio (1956-1958), he got a graduated diploma in Communication at the University of Paris (1968).

During the seventies, he was professor, chief of department, dean of extension and vice-rector of the University of Brasilia and he is author of publications on communication, education and politics matters, in Portuguese, Spanish, English and French. From 1981 to 1999, he was director of Higher Education in UNESCO. During this period he launched and coordinated the UNITWIN/UNESCO Chairs Programme and was the main organizer of the World Conference on Higher Education (1998). Since 1999, he became member of several organizations such Global University System (Finland), Programa Anchieta de Cooperación Interuniversitaria (Spain and Brazil), CAERENAD (Quebec).

In 1999, he received the French “Légion d’honneur”. In 1993, he got the “Ordem do Mérito Educativo” (Brazil). In 2003, the Federal University of Minas Gerais (Brazil) decorated him “for his excellent contribution to the development of the society”. In 2005, he got a title of doctor honoris causa from Universidad del Noroeste de la Provincia de Buenos Aires.

Marco Antonio Rodrigues Dias presented the paper entitled 'The Institutional and Political Challenges of Accreditation in the International Sphere' at the Third International Barcelona Conference on Higher Education, 'Accreditation for Quality Assurance: What Is at Stake?'.

Marco Antonio Rodrigues Dias spoke to GUNI on higher education trends and the challenges to be faced in the coming years. He believes that the principles approved by the WCHE in 1998 and the concept of education as a public good continue to be valid.

You played a central role in organizing the UNESCO World Conference on Higher Education in 1998, which will soon be celebrating its tenth anniversary. What are the major challenges facing higher education in the coming decade?

Though ten years have elapsed since the last World Conference on Higher Education and major political, social and technological changes have given rise to new scenarios, the principles and the basic challenges established in 1998 are still valid today. Moreover, one issue in particular needs to be kept in sight, and this is the question of quality linked to relevance. Higher education institutions need to be well organized, which is why efforts to improve management are fundamental. Poorly organized institutions with defective equipment, unsuitable premises, and badly structured laboratories, etc., will be unable to fulfil their goals, and will thus be unable to offer quality courses or contribute to the search for solutions for the key problems of society, whether at the local, regional, national or international level.

Nevertheless, the main challenge facing higher education is still that of helping to build a better, fairer society—a central issue in 1998. The basic principles of the WCHE Declaration, in fact, were demanded by student activists in May 1968 in Paris—and even before then, in the Argentine student revolt of 1918, which resulted from the demand for a modification of feudal society in the province of Córdoba.

Could you expand on the concept of quality linked to relevance?

Many of those who talk of reconsidering the issues discussed in 1998 have no time for relevance, but refer to quality as if it were a formal concept. They in fact propose regulatory principles for reforms without taking relevance into account; this could lead to a situation in which a single model of education is again imposed, a model that always originates in wealthier societies. At present, the predominant model is that of English-speaking countries, particularly the United States and Great Britain. Thus, when a quality evaluation is made, rather than compare the reality of their higher education institutions with the standards produced by and for rich countries, the authorities of developing countries should compare what their institutions do with the objectives set in the respective mission statements, always if they have been defined locally and in an autonomous way.

Given the trends that you describe, how do you see higher education ten years from now?

It is quite clear that the development of new technologies has brought about and will continue to bring about many organizational and pedagogical changes. One example is the Internet and the way it is used to organize academic life. Academics are no longer the exclusive custodians of knowledge; students may have equal or greater access to knowledge because they usually have more time and are more proficient in their use of technology.

On this basis, the function of academics needs to change. First of all, it is not enough for them to have basic knowledge of their discipline; they also need to know what direction to take and how to mentor. Secondly, and as a consequence, rather than function as providers of knowledge they need to adopt a role as mentors. Students, for their part, need to be able to process all the information that is available to them in order to be able to select and analyse it correctly. Likewise, given the pace at which information is updated, they need to be able to continue learning within a system that offers lifelong education tailored to each individual student. There are those who say that a certificate should only be valid for a maximum of five years, and that programmes should be adapted to individual students. In fact, this is already a reality. As an example, since the 1970s students at the University of Brasilia have been required to complement the basic course they are taking with disciplines of their choice that are agreed with their mentor.

However, given the advances that are likely in the future, technology alone is not enough; new languages need to be developed, as has occurred here in Barcelona at the Open University of Catalonia (UOC), which has developed new methodologies and pedagogical language adapted to the new media.

These are all new instruments that will be increasingly used in the future. It is also important to bear in mind precisely where we want to go. I am of the opinion that we need to return to the principles of the Universal Declaration of Human Rights—aspiring to a fairer society, to which all levels of education should contribute. It is important to underline that we should not only focus on higher education but on education in general. One of the major problems with international organizations such as the World Bank, the International Monetary Fund, the World Trade Organization and even some officials of UNESCO itself is that they compartmentalize activities in the educational sector. On the basis of recommendations issued by rich countries, poor and developing countries have invested substantial efforts in basic education, but without taking higher education into account. As a result, these countries are not training people who can maintain the quality of basic education, people who can guarantee that development will be in line with needs or who can define perspectives for society. A poor basic education system will lead to a poor higher education system. But, if higher education is poor, then basic education is not likely to be very good either.

I personally defend public universities. In my own country, Brazil, I’ve worked at Catholic universities—for example, in Minas Gerais and São Paulo—and at private institutions, but it must be said that, both there and elsewhere, Catholic universities have played an important role as providers of public service that has often been more significant than that played by public universities. Another example is the people’s universities created with the aim of responding to basic local development needs on the basis of agreements between workers cooperatives and local public authorities in areas of southern Brazil.

Such developments are very interesting, as they lead us to a fundamental consideration—that education be viewed as a public good. Normally, education is a function of the state, but the state cannot do everything, so we need a licensing-delegation-authorization system. Professional bodies and private or community institutions will thus act according to basic principles underpinned by a vision of education as a public good.

Although progress is being made in this respect, the fact remains that in many South American, Asian and African countries, privatization has led to the transformation of education into a business while loosing the notion of public good, and this is unacceptable. Furthermore, this is happening because governments are not fulfilling their obligations in terms of respecting the basic principles I mentioned above. This is where an external evaluation system, rather than an internal system or system originating in ‘friendly’ institutions, has a role to play.