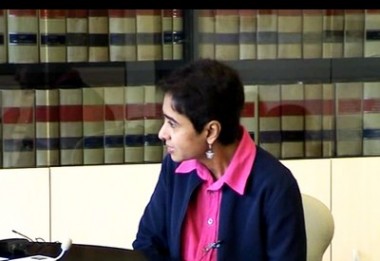 Mala Singh is the executive director of the Higher Education Quality Committee (HEQC) of the Council on Higher Education. Dr Singh has served as executive director of the Centre for Science Development in the Human Sciences Research Council, and of the Division for Humanities and Social Sciences in the National Research Foundation. She was formerly a professor and head of the Department of Philosophy at the University of Durban-Westville. She has published in the fields of philosophy and higher education. Dr Singh conducted post-doctoral research at the University of Cologne and at Yale University in the United States of America. She is an honorary professor at the Department of Philosophy, University of Pretoria. She was founding president of the Union of Democratic University Staff Associations (1988-90), coordinator of the National Commission on Higher Education Task Group on Governance (1995-1996) and a member of the writing team for the Green and White Papers on Science and Technology in South Africa (1996). She is a member of the Scientific Committee of the Study Programme on Higher Education Management of the Association of African Universities. Dr Singh is a board member of the International Network for Quality Assurance Agencies in Higher Education (INQAAHE); a member of the Task Force of the UNESCO Global Forum on International Quality Assurance, Accreditation and the Recognition of Qualifications; and vice chair of the Regional Scientific Committee for Africa, of the UNESCO Global Forum on Higher Education, Research and Knowledge. She is an honorary professor in the Department of Philosophy at the University of Pretoria.

Executive director of the Higher Education Quality Committee (HEQC) of the Council on Higher Education. Mala Singh talked about the present and the future of higher education in Africa, which she thinks can help overcome ethnic conflicts by strengthening a common African identity

Mala Singh, believes that an African higher education area is still in its infancy and that governments need to implement effective measures to assure quality and recognize qualifications across the continent. Ms. Singh also talked about how higher education in Africa can contribute to social goals and discussed the need to create more stable social and political environments in order to fight brain drain. Ms. Singh presented the paper ‘The Governance of Accreditation’ at the 3rd International Barcelona Conference on Higher Education.

Could you assess the possibility of creating an African higher education area in the future?

I think we are still very much at the first stage of the process. There has been some discussion lately about an African higher education area, but I think that we are still defining what this means and providing some content to the idea.

But having said that, I also think that many of the challenges addressed by the Bologna process are similar to the ones we can see in African countries, such as greater levels of regional integration, mobility of staff and students, and recognition of qualifications.

These are problems that we face in Africa as well, so I think it is probably an interesting idea around which to organize, to think about integrating the higher education systems and the arrangements that we have in Africa.

In this context, what aspects of government would require work in order for an African higher education area to be possible?

Well, if you look at the Bologna process, quality assurance systems play a very significant role in the discussions. So, if we took this as a starting point for thinking about an African higher education area, the development of quality assurance systems is at a very early stage in many African countries. There are countries that have established a functioning system, but there are also many countries that are just starting to develop a quality assurance and accreditation system. I think that some kind of government arrangements should be made in this area.

In fact, some initiatives offer the potential to provide this kind of government framework. For example, the Association of African Universities is about to launch a major quality assurance initiative that is due to start in 2007. One of the products of that initiative, hopefully, will be an African network for quality assurance. Another initiative is the South African Development Community Protocol, which is an organization of about 14 member countries that have arranged to collaborate in certain areas. For instance, one group is looking at setting up a regional qualification framework, and another group is thinking about how to develop a regional approach to quality assurance.

There are also UNESCO arrangements. UNESCO has a number of regional conventions, which are legal instruments for facilitating the international recognition of qualifications for graduates who come from other countries in the region. So, on the African continent we have the Arusha Convention, a legal instrument for facilitating that kind of recognition. Our challenge is to get as many African governments as possible to sign to that convention and then make sure that they are doing everything in their power to facilitate the recognition of qualifications.

Well, I think that in order to answer that question, one also has to think about the contextualization that creates African higher education’s capacity to contribute to social goals and development.

But I think that we cannot forget that, in the past, the orthodox views of multilateral organizations like the World Bank caused severe damage to higher education institutions in Africa, and to African universities’ ability to produce knowledge that is relevant to development and graduates who could contribute to the development agenda.

But now, of course, the World Bank, and a whole range of other international organizations, have changed their views. They now believe that universities are, in fact, important for social and economic development. African ministers of education have also joined this trend, so there are now a number of initiatives concerning the revitalization of African higher education.

Once we have clarified the context, I think that actually there are different ways in which African higher education could contribute to the continent’s social goals. For instance, many universities have community outreach programs that could clearly contribute to social development needs.

About the issue that you mentioned, in relation to Europe and the European identity, I imagine that higher education in Africa could also help create an African identity, which I think would be particularly important given the whole range of conflicts that have been fuelled by issues of ethnic identity. It could become a common frame of reference to go beyond these divisive ways of thinking.

There are other social issues to which African higher education could contribute in terms of equity, access and mobility. Also, it could improve the degree of integration of women in society and in the economy. And, of course, it could facilitate the participation of students from rural communities.

In addition, all this is also related to measures and strategies for avoiding brain drain in Africa.

Could you recommend other measures to avoid brain drain and help retain qualified professionals who can contribute to the development of Africa?

Well, I think that there are different aspects to avoiding the brain drain. One is how to keep the people in the country who are still there. The other aspect is how to encourage people who have left to come back, or, if not to come back, to make some kind of contribution to development work.

I think that there are clearly systemic issues that you have to address in order to ensure that people will stay, and will want to stay, in their countries. We have civil wars, we have authoritarian governments, and the lives of academics and intellectuals who speak out against those regimes are in danger. In higher education itself, we have a lack of research facilities, we have labs in very poor condition and we have poor salaries.

So I think that the strategy is to create a more stable social and political environment that will encourage highly trained professionals to want to stay in their country and want help build that country. One you have done that, you need universities to be reasonably capacitated to be able to offer research facilities, pay decent salaries and provide access to the books and journals that make research possible.

In relation to the possibility of bringing some professionals back, I know of some initiatives where research organizations in some countries have set aside money to bring back academics, professionals and researchers in particular fields that are needed for the development of the countries. But I think perhaps a more useful strategy would be to allow shared appointments between African and foreign universities in order to get the benefits of people’s expertise even if they don’t wish to relocate completely. If people don’t want joint appointments, you could try to involve them in different projects, for instance in capacity development projects or in supervising the students of a master’s program. It is not easy. Another issue is that we need to know the scale of the brain drain: how many people are leaving, and is anybody coming back? And if some are coming back, who are they and what are the factors that are bringing them back?

Anyway, there are huge challenges for which we need every intellectual resource that we can possibly lay our hands on. And there are many projects to attempt to involve colleagues from outside the continent. There are initiatives to do research on development strategies and alternatives for Africa. There are also initiatives to do research on policy alleviation strategies and on the diseases that afflict Africa, like tropical diseases or malaria, for instance. And then, of course, we have the very serious problem of HIV. So there are many initiatives to try and get colleagues who are working in Africa to work in partnership with researchers who have left the continent or even with researchers from other countries.

We are facing numerous challenges. It would be very nice to quickly increase the continent’s ability to solve its problems in these areas.