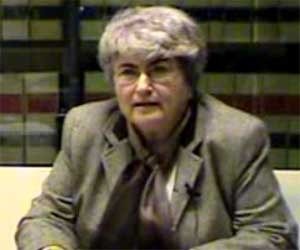 Gemma Rauret has been the director of the National Agency for Quality Assurance and Accreditation (ANECA) since June 2006. Previously she was director of the Quality Assurance Agency for the University System in Catalonia (AQU). She has a degree in Chemical Sciences and a PhD in Sciences from the University of Barcelona. Her field of research is environmental analytical chemistry and the quality of the analytical process. In 1992 she received the Narcís Monturiol medal of merit for scientific research. In the field of university quality, aside from her work as director of AQU, she has championed the importance of assessment and presided over the internal assessment commission for the degrees in Chemistry and Chemical Engineering at the University of Barcelona. Furthermore, she has participated as an external assessor in other Spanish universities.

Gemma Rauret spoke to us of the challenges that must be faced in the years ahead by the Spanish higher education system within the European Higher Education Area. She also spoke of the role that ANECA will play in this context and the strategy it will employ.

How will the European Higher Education Area (EHEA) affect the work of ANECA? It implies a lot of changes because in the past we were assessing qualifications on a voluntary basis on behalf of the universities, but now we have changed to compulsory pre-assessment.

Within the EHEA we will have to demonstrate that we are complying with European criteria and directives, both within ANECA and with regard to the methodology that we apply in university assessment. To this end (as ratified recently, in September 2007), ANECA has just undergone an external assessment process, carried out by the European Association for Quality Assurance in Higher Education (ENQA), which has endorsed our professionalism, transparency and independence.

What do you believe are the main challenges for higher education in Spain over the next five years?

From my point of view, which is based largely on questions of quality, I believe that the first challenge will be for all universities to put systems, procedures and mechanisms into place to guarantee the quality of their qualifications.

Secondly, universities will have to modify those current qualifications that do not fit the characteristics of the new European area to form similar qualifications, or even completely different ones, that do fit them. In this process, institutions will obtain a provisional verification (a kind of accreditation) – a process that has already started - which proves that they comply with the requirements of the EHEA and also that they have adequate systems of quality assurance in place. Subsequently they will have to obtain full accreditation, once the qualification has been fully completed and there are graduates in the street.

Thirdly, the higher education system must have adequate statistical data and greater transparency in everything that has a bearing on the quality of education and the indicators of results.

Finally, the fourth challenge, as I see it, is to ensure that the system of external quality assessment agencies, specifically the connection between national and regional agencies, is well coordinated.

Modifying all the qualifications and developing quality systems is quite a challenge. And the effort should not only come from ANECA, but from the universities as well: the universities must respond. I believe that we have been preparing to respond to these challenges for many years, and although it will be more difficult for some and easier for others, in five years I think there will be a change.

How would you assess the quality of higher education in Spain, in comparison with other European countries and the international arena?

In fact, if we measure quality in the context of how society receives the graduates that Spanish universities produce, we could say that the quality of Spanish universities is good. Our graduates generally have a satisfactory career integration. If, furthermore, we compare the levels of knowledge and skills that our graduates have with the average knowledge that an average European university student has, we could say that we are in a comparable position with the other European countries.

What are we missing? We are missing universities of excellence at a global level, which are still few in number. It is worth mentioning that there are some universities that are more advanced in this area, and some faculties can already be considered to form part of this group of excellent institutions, but it is an area that still needs improving.

On the other hand, what we do have in Spain, to a certain extent, is a fairly homogenous university network. In other countries this is not the case. The United States, for example, which is said to have the best universities, also has the worst. This does not happen in Spain, where there is greater homogeneity and comparability. The differences between universities are not as great as can occur in other countries. Nor are there cases in Spain of what is known as university fraud, such as the sale of qualifications on the Internet.

So, to summarise, I would say that we have universities that are responding to current needs, and they must continue to improve because the world is changing and they must increasingly adapt their responses. However, we must improve in the development of universities and centres of excellence. And finally, it should be noted that we do not have any bottom-rung universities.

What are ANECA's strategic lines of work for the next five years?

ANECA has a strategic plan for 2010 and a clear idea of where it wants to go. We want to give the highest priority to all those programmes that are working towards the accreditation of qualifications or institutions. This is something that until now has not been possible due to the lack of an appropriate legal framework, which at last we have.

ANECA wishes to be a national and international reference as a quality assurance agency, and hopes to gain the trust of all the stakeholders: students, universities, employees and public administrations. Furthermore, we aim to be the main source of information for society about university quality. These are the main strategic goals.

Each year we attempt to advance and define strategic objectives. For example, in 2007, we encouraged the participation of students in quality assessment because we believed that in general students are still being left out of this process.