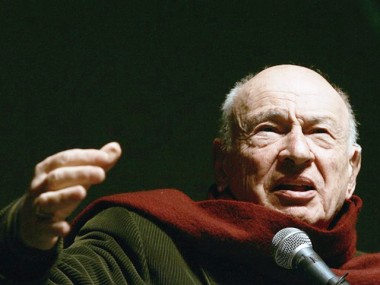 Edgar Nahoum was born in France in 1921. He is better known as Edgar Morin, a name he adopted during the French Resistance. He trained as a sociologist and is now researcher emeritus at the National Centre for Scientific Research (CNRS) in France. Indeed, Edgar Morin embodies transdisciplinarity in all his work (from his first book published in 1946, L’an zéro de l’Allemagne, which has been translated into English under the title Germany Year Zero, to his last work, La violence du monde, co-written with Jean Baudrillard and published in 2003), which covers a wide range of interests, from cinema to modern biology, and crosses disciplinary boundaries. He has received international recognition, in South America in particular, because of his association with complexity theory. He is president of UNESCO’s European Agency for Culture and the Association for Complex Thought (APC), and is a board member of the International Center for Transdisciplinary Research (CIRET). His most highly acclaimed work is La Méthode (Method). Many of his books, such as Les Stars (The Stars); La Méthode 1: La nature de la nature (Method 1: The Nature of Nature); Introduction à la pensée complexe (An Introduction to Complex Thought) and Les sept savoirs nécessaires à l'éducation du futur (Seven Complex Lessons in Education for the Future), have been translated into several languages.

Edgar Morin spoke about key questions in the areas of higher education, universities and today’s society in general. Professor Morin, a man of exceptional farsightedness, warns of the great blindness of our times and underlines the role and responsibility of universities in establishing authentic dialogue and understanding among cultures and civilisations.

You state that your optimism is based on the improbable. What improbable changes would you wish for in the role occupied by universities?

I am neither an optimist nor a pessimist. I have met a number of French people who were optimists but who, when faced with disillusionment and a reality that did not correspond to their optimistic outlook, became disillusioned and turned into pessimists. On the other hand, someone who was a pessimist became more determined to press ahead when things did not work out. I believe that we should not be overly pessimistic or optimistic; instead, we should overcome both notions, dismiss them. It is a question of conscience and of totality, of keeping in mind those things that we regard as vital and necessary. In this way, we can keep up our resolve and courage to go on. I believe this to be important.

Moreover, the very structure of institutions and knowledge needs to change. Today, the probability of this happening is not negligible, because there have been many shows of awareness around the world. I will talk about this later on.

I developed my ideas on education in Seven Complex Lessons in Education for the Future, a book that was first published by UNESCO and then disseminated around the world. In line with these ideas, a new type of university has been founded in Hermosillo (Sonora, Mexico), the Edgar Morin Multiuniversity. Forgive me for my immodesty but I did not choose the name. This is how the first steps have been taken.

Again in Mexico, a university in Xalapa (Veracruz) and another university in Monterrey (Nuevo León) decided to set up a type of transdisciplinary doctorate that is centred for the most part on the human sciences; thus, a thesis or problem with an economic, religious or demographic dimension can be developed or tackled in these programmes. This is progress. Furthermore, in Carmona, a town close to Seville in Andalusia, Spain, a cultural institute has carried out a project for education in what I call vital fundamental problems. This project includes education for everyone, including the young, the elderly and workers.

What fundamental shifts in paradigm are needed in order for global society to evolve in a positive way? What are the major blind spots of our time?

There are traditional blind spots, the greatest ones in our time, such as those that occur in what we could call Manichaeism, which is the idea that we represent good and others evil. This idea, which is not new, takes shape in religious or political fanaticism.

Likewise, I think that knowledge that is entirely based on mathematics or calculus is a blind spot. For me, it is evident that relevant knowledge is not just that which is sophisticated, formalised or mathematical. Despite the importance of this type of knowledge, if you only consider knowledge that is calculable, you are turning a blind eye to the human realities of suffering, of the soul, of love and of hate.

Another blind spot is the inability to know things in their own environment. This blindness comes from how our minds obey a principle of disjointedness and reduction that separates everything but cannot link the elements back together. I think this blindness is very dangerous because it is not aware of it being blindness; it believes itself to be lucid and true and thinks that the truth lies within disciplines and not in the confluence of knowledge from various disciplines.

What obvious issues in academia and the world of universities should be questioned in order to give rise to education that is in keeping with a planetary model for peaceful coexistence?

I believe that education for human understanding is fundamental. It is, however, a very difficult task, because in order to understand others you have to understand yourself, that is to say, you have to understand the mechanisms of understanding. Therefore, it is important to develop a capacity for self-examination and self-criticism. We do have a tendency towards what the English call self-deception, a tendency to lie to ourselves, to create illusions about ourselves. There is a tendency to think that we are good and others are evil. We need a culture of the psyche that is more important than the physical culture and this should be developed as early as the first stages of education. Education should help people to understand other people.

According to the philosopher Hegel, if I call someone who once committed a crime a criminal I am dismissing all of the other facets of that person’s personality. When we watch a film such as The Godfather, for example, we see that “the godfather” (played by Marlon Brando) is a criminal; at the same time, we know that he is a complex character who feels love for his family. We must understand that humans are complex beings. We have many facets. This is the principle of understanding.

Starting from this principle we can improve our understanding of other cultures. For a long time, as Westerners we have lived under the illusion that we possess what is right, the truth and all that is good: medicine, health, everything. We have now begun to realise and understand that we should combine our medicine with other forms of medicine, such as Chinese or shamanic medicine. If we think that every culture, including our own, has its truths, its good things, its illusions, its mistakes, then we can give and receive. This condition is vital for what is today known as dialogue among cultures and civilisations, something that will be a blessing for humanity. Understanding is fundamental, but we have to understand misunderstanding before we can progress to understanding.

I think of what is called complex knowledge, which responds to the Latin word Complexus, meaning an interweaving of parts. Complex knowledge means seeing the common thread in things, seeing unity and diversity at the same time. Genetic, cerebral and anatomic human unity evidently exists but it is important to see that this unity manifests itself through individual diversity. For example, culture never exists as the culture, but rather manifests itself as a variety of cultures, and music through a variety of types of music. I believe that the meaning of unity in diversity is very important for complex vision.

We must understand that rationality that is simple, totally logical and tries to eliminate contradictions cannot comprehend the deepest problems and aspects of the universe. I think we have to make wide use of reason, while comprehending that reason cannot understand everything and that there are poetic ways of understanding and experiencing our humanity and nature. Knowledge knows that uncertainty exists and that we cannot know everything in an exhaustive way. Therefore, we must further our knowledge but also bear in mind that this knowledge is modest, and complex. This thinking embraces data but also allows you to embrace others. It is more fraternal.