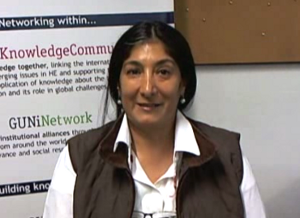 Cristina Teresa Carballo is director of the Master in Environment and Sustainable Development in the Universidad Nacional de Quilmes (UNQ). She has been coordinator of the Bachelor in Environmental Information in the Universidad Nacional de Luján (UNLu, 2006-2010). In addition, she is codirector of the Program of Geographic Studies in the same institution and coordinates the Center of Environmental Information. Since 2008 she coordinates the Culture, Territory, and Religious Practices Network, subsidized by the Secretariat of University Policies, Education Ministry. She has been guest professor for the Du Maine University (France). She counts with publications as a compiler, author and coauthor, in addition of having published articles in national and international magazines.

In this interview Cristina Carballo, from the Universidad Nacional de Quilmes, explains her vision of the university in Argentina and how the challenges of sustainability and cultural diversity have been addressed.

1. What is your vision of the university in Argentina and what are its principal challenges, if we compare it to those in the rest of the world.

It’s a very complex question. The Argentine university is marked by three very important historical facts. It’s the first in all of Latin America that set out to have free university at the beginning of the 20th century, and in this sense it always gave the impression of being a pioneer in Latin America. From the view of modern society, of equal rights this is something that marked Argentina early on.

Second, unfortunately there were, in the sixties and seventies, the different military dictatorships that impacted the intellectual production as well as the national frameworks, as much in the Universidad Nacional de Buenos Aires and Universidad Nacional de Córdoba as in the rest of the universities, losing valuable intellectuals who had to go abroad and also interrupted historical production within the national universities.

And the last is the return to democracy and reconstruction of what, in those times, were universities at a global level, with respected academics, and recognized academic production, a return to setting up its complex world, which was the 80s. I believe the advances have been very positive. Today you see results in changing of these historical structures. Like any university that has been around for a long time, it has an internal structure that are which at times asphyxiate or create resistance to determined lines of innovation.

Belonging to the university world on a global scale has meant that the modernization of many of these structures, above all the small and medium ones, in a positive sense.

I think Argentina has to recuperate its interaction with other universities. If we speak about Brazil and Mexico, their universities have an important resource in the state, and politicians with more than 30 years of continuous university exchange and production with the English or French speaking world.

2. As director of the masters program in environment and sustainable development at the Universidad Nacional de Quilmes, how do you see the challenge of sustainability in Argentine universities?

I think there are three scenarios to be able to understand this a little bit. One is the introduction of the environmental problem in scientific knowledge. I think that in this we were like the rest of the world. It took a long time, because it was questioned as a subject. The universities took their time in incorporating it into the scientific body, and scientific production.

Latin America began to incorporate this in the nineties. Also Argentina, although unfortunately slower, especially from postgraduates programs and then through undergraduates degrees. Some of them have a history of ten years. What there is, is a broad offering of postgraduate studies of different orientations, given the environmental problem that sometimes exists seen form very specific disciplines, such as talking about chemistry or environmental engineering, which requires very specific training. But when we speak of management, when we speak of regulation, when we speak of education, there is a very interesting offer in this sense, and in social sciences as well. I think that today the training of postgraduates is well balanced.

The originality of the Universidad Nacional de Quilmes, is to have the initiative to offer for the first time a curriculum in environmental management, which is correctly called a Masters in Sustainable Environmental Development in Virtual Surroundings, with everything that these projects and businesses mean.

Yes. I think that Argentine universities historically have had a special sensibility to what happens to its societies. It has always been engaged through academic policies and other places with the society itself. The topic of cultural diversity, in Argentina there was a project of modernization very early on that involved cultural homogeneity, as all modern nation states, where this diversity was never a problem for Argentina. Because of the large migration at the end of the 19th and beginning of the 20th centuries, the Pampa Gringa - as it’s called - was homogenized with the foreign Pampa. So, the other diversity of Argentina was very far away, in the north of the country, northeast, northwest and some presence of native peoples in the south, with Mapuches. Meeting this legitimate diversity in Argentine universities was not difficult. Social contexts accompanied, this need which set up today’s world and also with this dynamic the regional immigration and international that neither Buenos Aires, nor any other large city that is exempt. So cultural diversity is something that is present and that through having such a modern structure, I would say the most modern in relation to Latin America and the most European is also what is most sensitive to all this diversity and is demonstrating that this Pampa Gringa is not the only one in the country. It is also the diversity of the northeast and the northwest, the Andean culture or the Guaraní culture. That is to say, there are worlds within the Argentine culture that were in the margin during all this modernity.

What I’m personally interested in is emphasizing, is that cultural diversity needs to serve to unite, not divide. I think that is the only thing that nobody has stressed up to now. That is, recognize the other, but the other in the context of others and not in a context of separation.

Daniel Mato
Defining social responsibility: a matter of philosophical urgency for universities
The new agenda for the transformation of higher education in Latin America
Higher Education, Environment and Sustainability in Latin America and The Caribbean
Alexei Smirnov