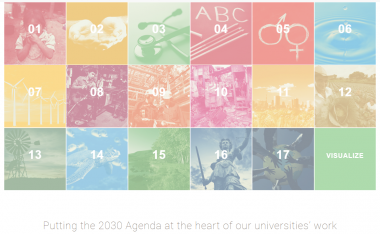 It was the United Nations in September 2015 that approved the 2030 Agenda for Sustainable Development, which presents a set of seventeen universally applicable goals that need to be deployed through to 2030. These goals include putting an end to all kinds of poverty in the world, reducing inequalities, tackling climate change, fostering inclusive, equal and quality education for everyone, ensuring healthy living at all ages, encouraging sustainable production and consumption, and guaranteeing safe and sustainable energy.

For the first time ever, the goals on the new Agenda are appealing to all countries in the world. It is no longer just a case of Northern Hemisphere countries helping developing countries, but an awareness that the planet’s problems and realities are a concern for us all. We can say that humankind is becoming collectively aware of our global challenges as a planet and a species, and with this in mind we need to agree to a fifteen-year plan to build a fairer, more progressive and more sustainable world. The SDGs are not legally binding, but governments around the world are expected to take them on board when establishing national or local agendas in consonance with the global agenda. They should therefore determine targets and specific plans, as well as mechanisms for evaluating and monitoring them on a national/local scale, which should serve as guidelines under the parameters of coherent policies.

The challenges ahead are huge. And the results, whatever they are, will probably be modest or partial. But it’s also true that, for the first time ever, humankind has defined a global roadmap to guide efforts in each country and global planet-wide projects. There is now a need for all national, regional and local governments, and all other territorial agents, to set up frameworks for action and negotiation in order to make a reality of the poignant adage of ‘thinking globally and acting locally’. In this regard, the Government of Catalonia is producing a more than adequate national plan for the implementation of the 2030 Agenda in Catalonia, based on the ‘Agenda 2030: Transform Catalonia, Improve the World’ report published by the CADS (Sustainable Development Advisory Board).

It is in this context that Catalan public universities are aspiring to be agents that can foster and, when necessary, lead the way both in Catalonia and in the international arena, in awareness of how knowledge, education and scientific research are such decisive factors for the implementation of the SDG. Indeed, the complexity of the SDG implies the need to invest in knowledge and in social and technological innovation and, of course, need the people to be educated in and made aware of the planet’s challenges. That is why universities and research centres are such key agents in the deployment and monitoring of the SDG.

The Catalan Association of Public Universities (ACUP) has been at the forefront of the debate and dissemination of the SDGs on a Catalan scale, and there is explicit commitment among universities to adapting their policies, courses and scientific research in compliance with the goals. The fact that every year more than 230,000 young (and not-so-young) people pass through the lecture halls of our universities is enough to show what an impact the right education can have on people and professions. Likewise, the ACUP, together with UNESCO and the United Nations University (UNU), is promoting the Global University Network for Innovation (GUNi), which today brings together 218 universities, UNESCO chairs and research centres in 78 countries around the world, and is seeking to play a leading role in the debate and analysis of the application of the SGDs around the world and the contribution to this by the world’s universities and academic centres. The congress in Barcelona therefore offered a unique chance to showcase how Catalonia and its universities are so fully committed to effective leadership of the assumption of the 2030 Agenda.

Do we educate to strengthen democracy and the common good?
Education as a pillar of the 2030 Agenda. Evolution and perspectives in the context of the Covid-19 crisis
Present and future of the humanities (II): between digitisation and artificial intelligence
The SDGs: our new north star
After Covid-19 (I): Either we swim together or we drown