“If we do not work together, the Sustainable Development Goals are not worth the paper they are written on" 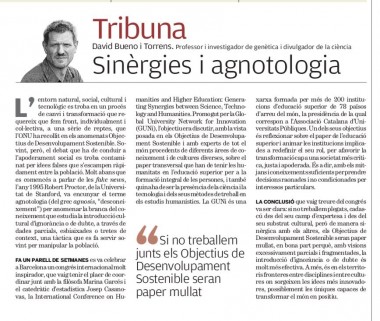 The natural, social, cultural and technological environment is undergoing a process of change and transformation that requires us to both individually and collectively face up to a series of challenges that the UN has compiled as the so-called Sustainable Development Goals. But the debate that should lead us to social empowerment is all-too-often contaminated by false ideas that quickly spread among the population. In 1995, long before people started talking about fake news, Robert Proctor of Stanford University coined the term ‘agnotology’ (from Greek agnosis, ‘ignorance’) to describe the branch of knowledge that studies the cultural introduction of ignorance or doubt, through partial, biased or out of context data, a tactic that is often used to manipulate the population.
A couple of weeks ago, Barcelona hosted a highly inspirational international congress, which I had the pleasure of coordinating together with the philosopher Marina Garcés and the professor of statistics Josep Casanovas. The purpose of the International Conference on Humanities and Higher Education: Generating Synergies between Science, Technology and Humanities, promoted by the Global University Network for Innovation (GUNi), was to discuss, with the focus on the Sustainable Development Goals and featuring experts from all around the world in different areas of knowledge and from diverse cultures, the transversal role required of the humanities in higher education for the comprehensive training of people, and also the part to be played by science and technology and their working methods in humanistic studies. GUNi is a network made up of more than 200 institutions of higher education from 78 countries from all around the world, and which is presided by the Catalan Association of Public Universities. One of its objectives is to consider the role of higher education and encourage the institutions involved to redefine their roles, in order to foster change towards a more critical, fair and empowered society. And this needs to be done with sufficient means and knowledge to make reasoned decisions that are not conditioned by private interests.
The conclusion that I drew from the congress was clear: if we do not work together, each in our own field of expertise and from our own cultural substratum, but in synergy with each other, the Sustainable Development Goals are not worth the paper they are written on, to a large extent because, with excessively biased and fragmented outlooks, the introduction of ignorance or doubt is much more effective. Moreover, it is in the frontier land between disciplines and between cultures where the most innovative ideas arise, and quite possibly the only ones that are able to make positive changes to the world.

“If we do not work together, the Sustainable Development Goals are not worth the paper they are written on”

David Bueno (Barcelona, 1965) is Professor of Genetics at Universitat de Barcelona, and former researcher at Oxford University. He also developed short research projects at Innsbruck University and at the European Molecular Biology Laboratory in Heidelberg. He is author or co-author of over 60 peer reviewed papers in indexed scientific journals on the fields of developmental genetics, neuroscience and behaviour, and he is also author or co-author of fifteen books and several book chapters.

He is the director and scientific editor of the book series Catàlisi (Edicions UB) on science spreading and socialisation, and he published over 600 papers in general newspapers and magazines. He also collaborates with several TV and radio programs, and is the coordinator of the Catalan University Access Examination for Biology.

David Bueno is member of the Editorial Team of the Higher Education in the World Report 7 and Local Advisory Board of the GUNI International Conference on Humanities and Higher Education: Generating Synergies between Science, Technology and Humanities.

The SDGs: our new north star
The global agenda for sustainable development, a feasible dream?
Engaging partners is a key role for HE in sustainability
GUNi signs a Strategic Partnership Agreement with the UfM Secretariat
Registration is now open! GUNi International Conference on Humanities and Higher Education: Generating Synergies between Science, Technology and Humanities