Several of the most pressing problems and challenges faced by humankind were identified in 2000 as Millennium Development Goals. World governments made a commitment to meet these goals by 2015. To what extent are these goals a subject of concern for higher education? Should higher education institutions take heed of and participate in the debate surrounding these issues? In what ways can they take an active and participatory role in the face of these challenges? These are some of the questions put forward in the call for submissions to the Second Essay Competition of the International Association of Universities (IAU). In this article, Goolam Mohamedbhai, president of the IAU, presents several ideas on how to respond to those questions and invites international higher education experts and researchers to participate in this Essay Competition.

Last year I participated in an international workshop where I was making a presentation on how higher education can make a contribution to development in Africa. At one point I asked: do you know how many Millennium Development Goals (MDGs) there are and, if yes, can you recall at least half of them? I saw a couple of hands hesitatingly going up, a few participants apologetically looked down in front of them and the rest looked dazed. That is the first major problem with higher education and the MDGs. The vast majority of academics are not aware about them, and cannot therefore even start thinking about how their institutions can contribute to them.

I therefore explained that in 2000, the leaders of all the countries of the world assembled and took stock of the bleak picture of our planet. They formulated a vision of how they want their world to be in the future - a world where there is less poverty and fewer hungry people; a world free from infectious diseases, where mothers and their babies can expect to live longer, children can have access to education and girls and women have equal opportunities in life as boys and men; a world which cares for its precious environment and one where the haves and have-nots join hands for the betterment of the whole mankind. The leaders then drew up the MDGs and set the target time of 2015 for their achievement.

When I listed the eight MDGs, the next major problem surfaced. Some bewildered faces begged the questions: are these MDGs really the business of higher education? Should not these be the responsibility of our governments? Most academics have difficulty in relating higher education to the MDGs or rather cannot link the work of their institutions to the goals to be achieved.  And yet, there is no question that higher education can, indeed does, contribute towards achieving the MDGs.

It is precisely to sensitise higher education institutions to the importance of their role in achieving the MDGs that the International Association of Universities (IAU), in partnership with Palgrave Macmillan Ltd., decided that the topic for its biennial 2008 Essay Competition, leading to the IAU/Palgrave Prize in Higher Education Policy Research, would be ‘Contribution of higher education towards achieving the UN MDGs’.

Let us therefore examine the MDGs in some detail and see how they relate to higher education.

Goal 1: Eradicate extreme poverty and hunger. The regions with the largest proportion of poor people are Sub-Saharan Africa and Southern Asia. In countries in these regions the vast majority of the population live in rural areas where poverty is worse, and where agriculture is the main rural activity. Agricultural colleges and universities can therefore play a key role in promoting rural agricultural development through teaching, research and outreach programmes. In fact, rural development should be mainstreamed in all areas of higher education in those regions.  In engineering, for example, the students should be apprised of the local building materials, of the water supply and sanitation technologies appropriate to rural areas, of alternative sources of energy, etc. The University of Development Studies in Ghana, created in 1992, is a remarkable example of a pro-poor, rural community-based institution where in all programmes students have to spend one trimester each year over three years doing community-based practical fieldwork.

Goal 2: Achieve universal primary education. Again it is in rural areas in developing countries that we find the largest numbers of children who do not attend school. Higher education can contribute by researching into the causes of non-attendance in specific areas, arrange for literacy programmes for parents who can then be influenced to send their children to school, encourage their student teachers to give preference to a rural than urban posting, etc. But of course the most important contribution of higher education to the primary education sector is in ensuring that sufficient teachers are trained to meet the needs of the country, and existing ones are re-trained.  It has been estimated that Sub-Saharan Africa, where about 40% of primary school age children are out of school, would require an additional 1.6 million teachers to achieve universal primary education by 2015 – a mammoth task.

Goal 3: Promote gender equality and empower women. Women can play a major role in the development of a country, especially in developing countries. Higher education should first develop appropriate policies to remove gender inequity in education at all levels. There are still many universities where women are grossly under-represented at student or staff level, particularly in science and technology areas. Higher education institutions should also mainstream gender in all their teaching, research and outreach activities.  Some universities, for example the University of Makerere in Uganda, have done so by establishing a Gender Institute for that specific purpose. There is also the excellent example of the University of Bakhat Alruda in Sudan which, in 2005, created a Faculty of Community Development with the main mission of promoting education and training of women in the rural areas of the White Nile.

Goals 4 & 5: Reduce child mortality & Improve maternal health. Under-five child mortality is quite high in many countries and it has been found that educating the mothers significantly increases the rate of child survival. Higher education institutions should therefore target educating mothers through their Faculties or Departments of Social Work. The other important factor in reducing infant mortality is immunization against measles. Here the Faculties of Health, in collaboration with the national Ministries of Health, should assist in the immunization programme. With regard to maternal mortality, evidence shows that maternal death at childbirth is considerably reduced when assisted by skilled attendants. Higher education institutions should train appropriate skilled personnel, such as nurses and midwives, to provide assistance at childbirth, especially in remote rural areas.

Goal 6: Combat HIV/AIDS, malaria and other diseases. HIV/AIDS is perhaps one of the worst health scourges to affect the world in recent times, and Sub-Saharan Africa is by far the worst affected region. There are many ways in which higher education institutions can assist in combating HIV/AIDS, but first and foremost they should assess the impact of the pandemic on their own institution. They should have a written policy on HIV/AIDS, if necessary set up a specialized unit to coordinate HIV/AIDS activities in their institution, integrate HIV/AIDS into their curriculum, undertake research and encourage community outreach activities. They should also collaborate with other institutions in their country or even region to adopt a concerted approach to the problem. An interesting example of regional collaboration is the West Indies, where a Commonwealth Regional Chair in Education and HIV/AIDS was launched in 2004 at the University of West Indies to coordinate the contribution of higher education to HIV/AIDS.

The above list is just indicative. There must be many, many other examples of possible contributions of higher education to the MDGs.. The IAU hopes, through its 2008 Essay Competition, to collect a rich repertoire of experiences and suggestions in this important area, and widely disseminate the most interesting and informative contributions received to its international audience of higher education institutions. Details of the Competition are available on IAU’s website and the winners of the Competition will be announced at the IAU’s 13th General Conference to be held in Utrecht, 15-18 July, 2008. 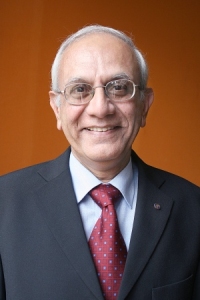 He has undertaken consultancies and commissioned studies for a number of international organizations, including the International Development Research Centre (IDRC), Canada, the UN Economic Commission for Africa, the UN Centre for Human Settlements (UN Habitat), the UNESCO Regional Office for Education in Africa, and the Association of African Universities. At the regional/international level, he has been a member or chairman of several UNESCO Committees on Higher Education for Africa. He has also been chairman of several university associations, including the Association of Commonwealth Universities (2003-2004), University Mobility in the Indian Ocean Rim (2001-2004) and the University of the Indian Ocean (1998-2005). He is currently chairman of the Regional Scientific Committee for Africa of the UNESCO Forum on Higher Education, Research and Knowledge. He has been conferred honorary doctorates by Mykolas Romeris University, Lithuania, and the Institute of Business Management in Karachi, Pakistan.