On October 17, the ‘Big Tent’ group of regional and global community engagement networks held their second global video dialogue.  The PASCAL International Observatory at the University of Glasgow hosted the event with Rajesh Tandon, GACER Chair and PRIA President and Michael Osborne, PASCAL Director and Professor of Adult Education sharing the hosting roles. 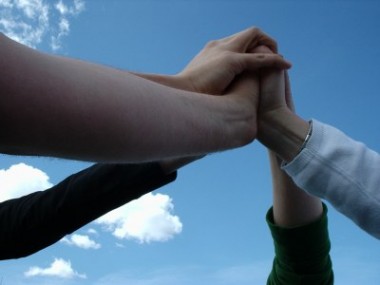 The focus of this second global dialogue was a “Future Scenario for Community University Research and Engagement”.   The communiqué urges universities around the world to set out a range of measures to sustain university engagement with communities to respond to important global phenomena, associated with the emerging citizens’ movement, demands for post-secondary education, and for deep societal transformation in many areas of social and economic life to address issues of sustainability, poverty and social justice.

There are plans to significantly expand the participation in the Third Global Dialogue that will most likely take the form of a webinar at the time of the 5”Th International Conference of the Living Knowledge Network, May 9-12 in Bonn, Germany.

Perspectives from the "Big Tent" Global Dialogue on Community-University Research and Engagement on October 17, 2011

This is the second global statement by the "Big Tent" group of international community university research and engagement networks. This statement has been facilitated by the PASCAL International Observatory and the Global Alliance on Community Engaged Research, in collaboration with: the Asia Pacific University Community Engagement Network, Centro Boliviano de Estudios Multidisciplinarios, The Commonwealth Association of Universities: Extension and Engagement Network, Global University Network for Innovation, Living Knowledge Network, National Coordinating Centre for Public Engagement in Higher Education, Participatory Research in Asia, and the Talloires Network.

Around the world, three phenomena have suddenly gained attention of political, economic and social leaders of our times. The first, of course, is the intensified, vocal, visible and powerful citizens’ movement—from Senegal, Thailand, India, Tunisia, Egypt, UK, Chile and the USA—everywhere. At the base of these movements are young people from all strata and spaces of society. The message from these citizen movements is clear— young citizens want to be engaged in the political and social transformation of their nation and local communities.

The second phenomenon is the increasing—rapidly increasing—demand for post-­secondary education in all its myriad dimensions, forms and contents. Millions of aspirants are queuing up for enrollment, but among the constraints are cost, quality and delivery. Educational administrators, planners and policy-­‐makers have yet to figure out how to respond to this surge and the diversity of demands from all societies.

The third phenomenon is the expression of need for a deep transformation of society in all areas of activity and all issues related to how we organise ourselves as a collectivity. Issues such as sustainability, poverty, peace, or social justice cannot be treated in isolation in the call for a new era for humanity.

A common element in these phenomena— citizens’ movements, the call for deep transformations and demands for post-­‐secondary education—is the youth of today. Irrespective of the percentage of young people in a society’s population, the young are a thinking differently, feeling and taking action in new ways. Most existing institutions in modern societies—governments, businesses, universities and colleges—are not able to understand or fully respond to the aspirations of the young.

What does the future hold for Community-University research and engagement?

Several interesting developments are happening at this time. First, many national governments and policy-­makers are beginning to think of devising appropriate supportive policies in this regard. The Planning Commission, Government of India, has recently constituted a task force to make recommendations to ‘strengthen community engagement of Higher Education Institutions’ for the 12th Five Year Plan. There have been similar initiatives in Malaysia, South Africa and Tanzania.

The government funders of research in the United Kingdom, for example, published a “Concordat for Engaging the Public with Research” in 2010, stating the clear expectation that UK research organisations make a strategic commitment to public engagement and that researchers be recognised and valued for their involvement with public engagement activities.

Importantly, several networks and alliances have emerged which are exclusively and largely focused on community-­‐university partnerships. The Talloires Network of university presidents began in 2005 to promote civic engagement of universities; it now has more than 230 universities from 60 countries as its members. Its new publication—The Engaged University—includes case studies of community-­‐university partnerships from around the world. In June 2011, the Talloires Network convened 180 member universities in Madrid to advance discussions about civic engagement.

A series of dialogues and conferences on themes of civic engagement of universities have been announced. The Global University Network for Innovation (GUNi) is planning its next conference and the GUNi Report, Higher Education in the World on this theme; the British Council is convening an international conference supporting these themes in March 2012.

The Asia-­Pacific University-­Community Engagement Network (APUCEN) was launched in July of 2011 with the Vice-­‐Chancellor or the Universiti Sains Malaysia as President. They will organize their second conference hosted by Thammasat University Jan 9-­‐12, 2012 in Chiangmai, Thailand with the theme “University-­‐Community Engagement for Empowerment and Knowledge Creation.”

The PASCAL International Observatory is turning it attention to matters of particular resonance to young people. It has also conducted studies across the world on the role of universities in regional engagement, including focused work conducted in Africa. A notable recent project supported by Pascal and funded by the European Commission is to build community engagement capacities amongst six universities in Palestine.

A world of knowledge democracy

There is universal recognition of our communities as a source of knowledge production.

Respect for and recognition of knowledge contributions of all parts of the world and all linguistic groups, of Indigenous Peoples, the poor, those differently abled and those who were considered 'excluded' in the early 2000s.

A 'knowledge commons' of open access to all forms of knowledge representation now functions all human knowledge belongs to all people.

The research and partnership capacities of community organisations have been dramatically strengthened for them to be effective partners.

The idea of an "Intelligent Society" has gained recognition, which is to say; we have passed from a society of intelligent individuals to an intelligent society capable of supporting resilience and well-­‐ being.

Half the countries of the world, and all G20 countries, have formal policies that support and finance Communuity University research and engagement.

The idea of the university in 2030

The 'unreached' of the early 2000s are now included in our universities.

The Millennium Development Goals of the early 2000s have been met, but universities are still focused on remaining issues of inequality and justice for all.

Social responsibility is a universal element in the understanding of university functions.

Sustainability, fairness, respect for religious diversity, peace and non-violence are integrated into the full teaching and research functions of the university.

There are permanent clusters, ad‐hoc clusters or complementary networks in which interdisciplinary partnerships can be formed for specific projects.

Large scale and on-going collaborative dialogue structures between community partners and universities on critical and complex issues are now part of the way that we do business.

All students have opportunities for engaged experiential learning in community settings.

All academic staff are now trained in principles of effective community engaged scholarship and civic engagement.

Large scale and on-going collaborative dialogue structures between community partners and universities on critical and complex issues facing our communities are now part of the way that we higher education institutions do business.

Excellence in Community University research and engagement is recognized for merit and career incentives for students, academic staff, and administrators.

There are national and international networks providing communities of practice and coordinated advocacy for Community University Engagement including benchmarking processes to support excellence in Community Engagement that replace the simplistic comparative rankings of  earlier years.

Journals showcasing theory and practice have proliferated and both university‐based and community-based practitioners and scholars publish together.

Research funders provide support to projects that have both scientific and societal impact and give special attention to joint research projects between civil society organisations and traditional research institutes.

Research funding policy incorporates concerns, needs, and knowledge from civil society and its organisations in research agendas; there are programs and facilities for joint agenda setting.