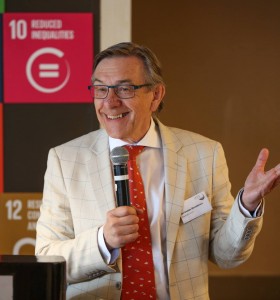 Senior Adviser at the United Nations

Educated at the Universities of Oslo (Norway), Uppsala (Sweden), and at St. Olaf College in Minnesota (US), in modern history, literature, environmental sciences and development issues, Jan-Gustav began working with the UN and the environment and governance in the 1970s and has stayed with this arena ever since. A first assignments for the UN brought him to Latin America in the 70’s, he has worked and lived in Botswana and Uganda, the US and Sweden in addition to Norway since.

During the 80s and early 90s Jan-Gustav taught about the UN, worked with the CSD process (UN Commission for Sustainable Development) 1996 – 2011, was a liaison officer between the UN and the NGO community at the UN HQ in New York in 97-98,  worked for the Norwegian aid agency in Botswana (83-85), and Norway’s foreign office in Uganda (2003 – 05) and has extensive NGO experience through more than four decades in almost all continents in the world, speaks several languages, is a seasoned lecturer, lectures regularly at the Oslo University College in Norway; has given workshops and guest lectures all over the world on the UN, governance, environment, sustainable development and stakeholder engagement, evaluated projects and organisations in Africa, Asia and Latin America, advised governments on relations with civil society and NGOs, chaired UN meetings, facilitated UN processes, translated several books from English to Norwegian, authored two books and numerous articles on the environment and sustainable development. For more than 10 years, he was senior editor for a daily UN conference newsletter on environment, sustainable development, civil society, and governance, has researched and written option papers commissioned by the UN (UNDESA and UNEP) on stakeholder engagement, UN organisations and its governance structure and on sustainable development. On an assignment from UNDESA, he helped coordinate civil society and its work with the Rio+20 process and subsequently continued working with developing the Sustainable Development Goals (2010 – 2015).

While also working for Stakeholder Forum UK on global sustainability and governance issues and Pure Consulting in Norway where he advices the private sector and municipalities on implementing the SDGs, Jan-Gustav also works as an independent researcher, adviser and consultant writing, lecturing or doing research on environment, governance and sustainability issues and when he is not travelling the world, he works out of his home outside Oslo, Norway.