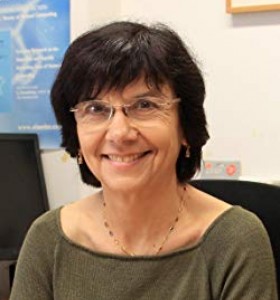 Research Professor at the Spanish Scientific Research Council (CSIC), and Head of the Perception and Manipulation group at the Robotics Institute in Barcelona.

Carme Torras is Research Professor at the Spanish Scientific Research Council (CSIC), and Head of the Perception and Manipulation group at the Robotics Institute in Barcelona.

She received M.Sc. degrees in Mathematics and Computer Science from the Universityof Barcelona and the University of Massachusetts - Amherst, respectively, and a Ph.D. degree in Computer Science from the Technical University of Catalonia (UPC). Prof.
Torras has published five books and about three hundred papers in the areas of robot kinematics, computer vision, geometric reasoning, machine learning and manipulation planning. She has supervised 18 PhD theses and led 16 European projects, the latest
being the Chist-Era project I-DRESS, the H2020 project IMAGINE, and her ERC Advanced Grant project CLOTHILDE – Cloth manipulation learning from demonstrations.

She is EurAI Fellow (2007), member of Academia Europaea (2010), and member of the Royal Academy of Sciences and Arts of Barcelona (2013). She has received the Dissemination Award of the Barcelona Science Museum, and the Narcís Monturiol Medal of the Generality of Catalonia.

Carme Torras is also a fiction writer and has published four novels in Catalan, for which she has been awarded several literary distinctions. Convinced that science fiction can help promote ethics in robotics and new technologies, one of her novels - winner of the Pedrolo and Ictineu awards - has been translated into English with the title &quot;The Vestigial Heart&quot; (MIT Press, 2018) and published together with online materials to teach a course on Ethics in Social Robotics and AI. More information at http://www.iri.upc.edu/people/torras