Ecological Footprint and Carbon Footprint as an environmental indicator for universities. Case of study: Polytechnic University of Valencia

The study presented in this paper evaluates the capacity of Ecological Footprint (EF) as an environmental indicator for universities and its suitability to provide useful and most relevant information to the environmental management system (EMS). The study is focus on Polytechnic University of Valencia (PUV); a University with more than 46,000 members, a surface of 71.3 ha spread in three campus. It is the first and biggest European organization that reaches EMAS verification for its EMS applied to the hold organization.

EF was defined by (Wackernagel & Rees, 1996) as ‘the ecologically productive territory needed to produce the resources used and to assimilate the waste and emissions produced by a population with a specific life mode indefinitely’.

EF has been calculated at several universities around the world (Lo Iacono Ferreira & Torregrosa López, 2009), but the lack of a standardized methodology and a strict link with university EMS limits its applications as an indicator of sustainability in these organizations.

In this study, an inventory of aspects and a methodology for the EF calculation at PUV is proposed. EF is calculated for the period 2006-2009.

EF can be understood as the addition of two different footprints: the Carbon Footprint (CF) and the Productive Footprint (PF).

CF measured the total CO2 emissions that directly or indirectly arise in the daily operation of the organization and are transformed in necessary ground for its assimilation. For each aspect (i) with it conversion factor (CoF), a CFi has been calculated as shown in [Equation 2.1].

Considering the Overall Average Uptake of the earth, total CF has be calculated as shown in [Equation 2.2].

Equation 2.4 represents how to obtain EF in hectares by year.
Equation 2.4

Prior to the calculation, the universe to explore has to be defined. A global EF and three partials EF, one for each campus, has been considered. An inventory with the aspects that constitute the universe has been defined as follows: Electric Energy, Infrastructures, Fuel, Water, Paper, Waste, Food & Drinks and Mobility. Consumptions of the different aspects have been converted into CO2 emissions through a specific conversion factor (CoF) for each aspect [Equation 2.1]. EMS of the PUV has been one of the more important sources of information as well as the mobility study of PUV carried out by ITRAT in 2009 (Colomer Ferrándiz et al., 2010). Table 3.1 contains all CoF used in EF calculation. 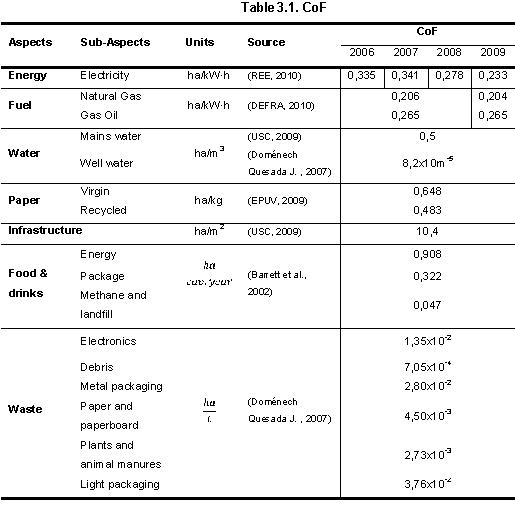 EF is calculated for the total student population of the university. For PUV, the parameter that defines student population is the equivalent student (es): an es is a student enrolled in 70 credits per year. For this parameter, the numbers of days of classes, holydays and exam days at the university has been considered. In 2009 the figure of the total student populations using this parameter was 27,865 es.
Years 2006, 2007, 2008 and 2009 have been evaluated. For the first three years not all information was available because EMS was still being implanted. However, for 2009, environmental audits have provided sufficient quantitative information.
Table 3.2 collects EF real results by aspects. Table 3.3 summarize PUV EF results for each year evaluated. 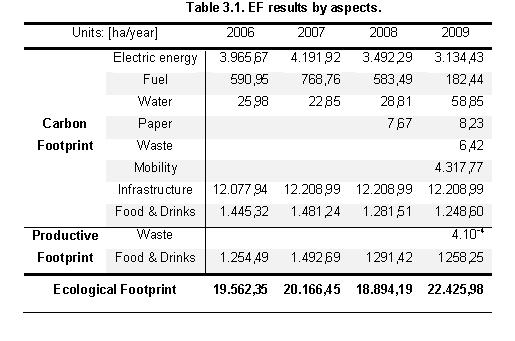 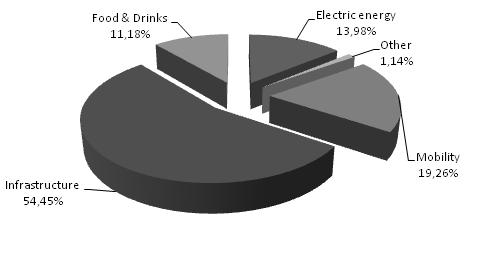 Mobility study (Colomer Ferrándiz et al., 2010) has allowed understanding weaknesses and strengths of each campus; awareness campaigns and programmes to reduce electricity consumption and minimising emissions due to transport are in continuous development despite the current economic crisis affecting such activities.

The implementation of this indicator in a complex organization cannot be done without an efficient EMS implanted. In the case of PUV, EMAS was crucial to get the information of inventory necessary to EF calculation.
EF turn to be a suitable indicator to fulfil the role of the 18th characteristic that the EMAS regulation (EMAS, 2009) reserve for these indicators, which is the “ensure relevance and comparability of information”, as well as focus on the “process and product level and using comparative parameters and suitable scales”.
EF can serve as an instrument for promoting environmental planning, setting objectives and goals and it follow-up.
Evaluation of the aspects considered through the use of EF must serve senior management of the University to improve the process of revision of the EMS and propose measures to reduce the impact of the considered aspects. The results highlight critical aspects and allow assessing the effectiveness of actions taken.
The results of this study indicate that aspects as Mobility, Electric Energy and Food & Drinks require establishing policies to reduce environmental impact, besides of Infrastructure. In response to this reality, PUV has already established specific actions with regard to the reduction in energy consumption which has been reflected in the Environmental Plan for 2010.
Aspects selected for EF calculation reflect much of the major environmental aspects of the organization.
The interpretation of the results is simple and can be used as a tool to direct awareness.
In addition, there is no doubt than a deeper analysis to draw better conclusions is required. Likewise, in subsequent studies influence selection of a more appropriate inventory, adequate system limits among other considerations be taken into account.
Extrapolation of results of PUV EF throughout the Spanish University system yields a result that although provisional and pending a more in depth, dimensions into perspective the importance of Spanish universities activities over Spanish EF.

The authors wish to acknowledge Infrastructure Vice-Chancellor of PUV, to personnel of AMAPUC for their dedication and collaboration and finally to Polytechnic School of Alcoy for partial funding of this work as for the facilities provided to the authors for the achievement of the study.